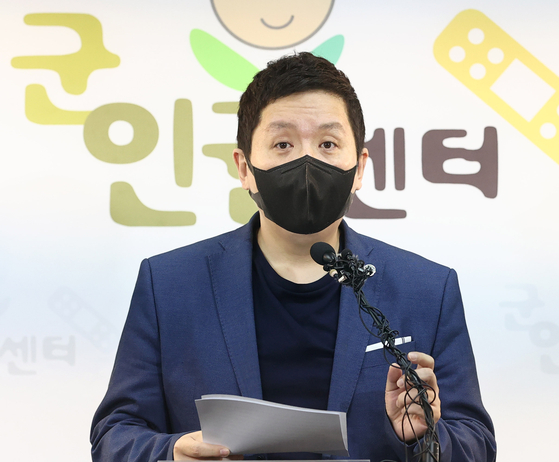 
A civic group has raised suspicions that the head of the military police division at the Air Force Headquarters ordered that the suicide of the female officer at the 20th Fighter Wing following unresolved sexual harassment be falsely reported as a simple death case.

The Military Human Rights Center held a press conference at its office in Mapo District, western Seoul, on Monday and made the claim based on reports received from multiple military officials.

According to the group, after the suicide of the female sergeant on May 22, the Air Force Headquarters' military police team initially stated the next day that a victim of sexual harassment had died, but the colonel at the head of the military police team prevented that description from being used.

“On May 23, the head of the military police team told the person in charge of the case four times to delete the fact that the deceased was a victim of sexual harassment,” center chief Lim Tae-hoon said. “The colonel essentially ordered a false report to be filed to the Defense Ministry.”

Calling the alleged intervention by the colonel “a cover-up directed down the line of command,” the rights center in the press conference called for an audit into the Air Force headquarters to be escalated into an investigation.

The organization also accused the Air Force of deliberately refusing to properly investigate or take action against the perpetrator after the female officer reported harassment, pointing to the fact that three days after the officer filed a report on March 5, the head of investigations at the 20th Fighter Wing concluded that no arrests should be made in the case.

Lim said, “If you just look at the victim’s report, it is clear that the incident should have been treated as a sexual harassment case and the perpetrator arrested within 48 hours. It is highly suspicious that a recommendation of no arrest should be made without even questioning the suspect.”

The Air Force has been roiled by its handling of the female officer’s sexual harassment case since the officer — a sergeant stationed at a base in Seosan, South Chungcheong — committed suicide last month.

The officer's family members uploaded a petition to the Blue House website on May 31, urging an investigation into her death and the sexual harassment which they believe led her to take her own life. The petition has garnered over 217,000 signatures.

Although the sergeant reported the harassment through a military hotline the next day, her family said that a superior officer in her unit urged her to reconcile with the offending officer, and even called her boyfriend — a fellow officer in the same unit — to persuade her to reconsider her complaint.