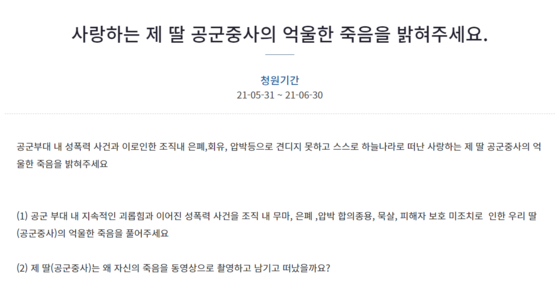 A petition uploaded to the Blue House website on May 31 by the family of an Air Force officer, urging an investigation into her death and sexual harassment report. [BLUE HOUSE WEBSITE]


A female Air Force officer who reported sexual harassment by a superior committed suicide, according to military authorities on Monday.

Surviving family members uploaded a petition to the Blue House website on Monday, urging an investigation into her death and the sexual harassment which they believe led her to take her own life. As of Tuesday, the petition has garnered over 217,000 signatures.

The female officer was reportedly an Air Force sergeant stationed at a base in Seosan, South Chungcheong.

The harassment allegedly took place in a vehicle when the pair were on their way home, with a lower-ranking officer who was driving as the sole witness.

Although the sergeant reported the harassment through a military hotline the next day, her family said that a superior officer in her unit urged her to reconcile with the offending officer, and even called her boyfriend –– a fellow officer in the same unit –– to persuade her to reconsider her complaint.

In their Blue House petition, the family also accused the Air Force unit of downplaying and covering up the incident by failing to follow established victim protection procedures and dissuading the sergeant from following through with her complaint.

Two days after she filed the harassment report, the sergeant requested to be transferred to another unit and went on a two-month leave.

At the end of her leave, the sergeant returned for duty at another unit on May 18, but was found dead in the officers’ quarters 4 days later.

According to her family’s petition, the sergeant filmed her last moments, including her suicide.

The sergeant reportedly registered her marriage with her boyfriend the day before her death.

In response to the news, Defense Minister Suh Wook on Tuesday ordered that “the truth be made clear swiftly and sternly, through a special investigative task force if necessary,” according to a military source who spoke on the condition of anonymity.

Both the sergeant’s sexual harassment report and her death is now under investigation by the Air Force prosecutors and military police.