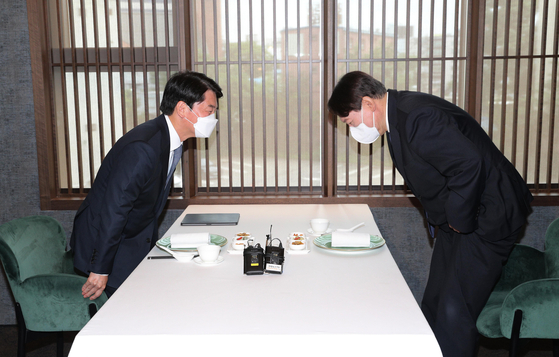 
Former Prosecutor General Yoon Seok-youl and People’s Party Chairman Ahn Cheol-soo had their first meeting on Wednesday and agreed to work together for the opposition’s victory in next year’s presidential election.

Yoon, who announced his presidential bid last month, met with Ahn, a two-time former presidential candidate in 2012 and 2017, for an almost 2 hour luncheon. According to their spokesmen, Yoon and Ahn agreed to continue their political and policy alliance.

Yoon and Ahn agreed that they will work together to deter the Democratic Party's (DP) victory in the March 2022 presidential election, their spokesmen said in a joint press briefing. They confirmed that they are rivals in good faith as well as partners.

According to the spokesmen, Yoon and Ahn agreed that they will have more meetings if necessary. They also agreed to work together to change the Moon Jae-in administration’s wrongful policies such as income-led growth, nuclear phase-out and another round of offering Covid-19 relief money to all citizens.

Ahn has spoken favorably about Yoon in recent months. “The people who want victory for the opposition in the presidential election had no one whom they could vote for, but Yoon emerged,” Ahn said in May. “No matter what happens, I hope he helps the opposition win the election.”

Ahn also said at the time that he has no plan to run for president. “For the opposition's victory, I will play any supporting role, whether it is a pacemaker or a guard,” he said.

In an interview with the JoongAng Ilbo in January, Ahn also said he tried to recruit Yoon as a proportional lawmaker candidate for his party in the 2016 general elections. “He had turned down the offer by saying he wanted to do his best as a prosecutor, and I started to like him even more,” Ahn said.

Yoon has been trying to form an alliance with more opposition political heavyweights. He had a meeting with Jeju Governor Won Hee-ryong, a presidential contender, on Friday. Yoon is also planning to meet with Rep. Ha Tae-keung of the PPP.

On the other hand, Yoon has been keeping his distance from some presidential candidates who are considered more formidable rivals such as Rep. Hong Joon-pyo, former Rep. Yoo Seong-min and former head of the Board of Audit and Inspection Choe Jae-hyeong.

“I discussed many issues with Ahn, an important politician in our country,” Yoon said. “We talked about cooperation for the opposition's victory.”

“It was a good opportunity to understand each other better,” Ahn said.

Asked if he had discussed with Yoon about how they will consolidate their presidential bids, Ahn laughed and said, “We have not gone that far today.”

Ahn also said he did not ask Yoon about a plan to join a political party.

The PPP has been asking both Ahn and Yoon to join the largest opposition party and run in its presidential primary in order to unite conservative voters.

“A public political party has to follow its official timetable,” PPP Chairman Lee Jun-seok said Wednesday, stressing that Yoon must join the party before the end of August.

“Joining our primary in late September of October does not make sense,” he said. “By then, the DP will have already selected its candidate. If we can not even start the primary, that is disadvantageous. We must make a strategic decision."

The PPP plans to hold its primary in late August or early September. The party recently appointed Rep. Suh Byung-soo as the head of the presidential primary preparation committee. The fifth-term lawmaker has experience working on the party’s presidential campaign in 2012.