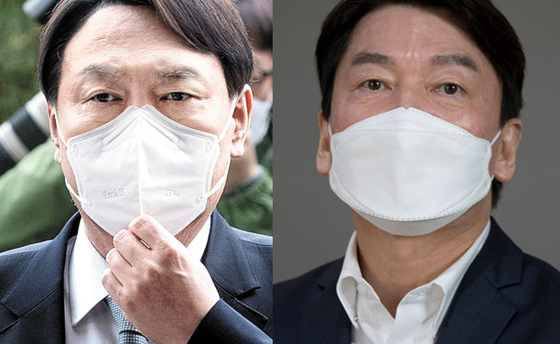 
Ahn Cheol-soo, one of prominent contenders for the Seoul mayoral by-election next month, is seeking to build a political alliance with former Prosecutor General Yoon Seok-youl.

"I hope Yoon will play a role in the opposition's presidential victory [in 2022]," Ahn, chairman of the People's Party (PP), said Wednesday in an interview with KBS. "In the near future, I hope he will help the opposition win the Seoul mayoral by-election."

Yoon stepped down on March 4 in protest of President Moon Jae-in's campaign to neuter the state prosecution service. After his resignation, considered a slap in the face to the administration, he has soared in polls for next year's presidential race, overtaking top politicians from the ruling party.

Ahn said observers are speculating that Yoon will start a political career outside the country's two-party system, a political positioning often referred to as the "third zone."

"A third zone is also part of a broader opposition," Ahn said. "We must work together to defeat the ruling party in the presidential election."

Ahn himself was once referred to as a "third zone" politician when he started his presidential campaign in 2012. He made two unsuccessful presidential runs — defeated by Park Geun-hye in 2012 and Moon Jae-in in 2017.

In a poll by the Korea Society Opinion Institute (KSOI) conducted on March 5, Yoon's rating soared to 32.4 percent, up from 14.6 percent in KSOI's previous survey on Jan. 22.

Another poll by Realmeter conducted on Tuesday and Wednesday showed over 45 percent of the respondents were willing to vote for Yoon for president if he runs as an opposition candidate.

More information about the polls are available on the National Election Survey Deliberation Commission website.

In the interview Wednesday, Ahn made clear he won't run in the 2022 presidential race if he becomes Seoul mayor in April. "My campaign pledges are five-year plans," Ahn said. "That shows my determination."

Ahn is currently negotiating a candidate consolidation with another opposition candidate — Oh Se-hoon of the largest opposition PPP. The two sides have agreed that only one of them will run in order to unite the opposition's votes against Park Young-sun of the Democratic Party.

"One thing that's clear is that I am the candidate with the highest possibility to win [in the mayoral by-election]," Ahn said. "I believe the people will support me, not someone with a unclear prospect."

He also confirmed that he won't join the PPP. "I am the chairman of a political party," Ahn said. "If I abandon my party, join another party and win its primary, supporters of my party won't back me. That will be a loss for the entire opposition."

In her interview with CBS radio Thursday morning, Rep. Kwon Eun-hee, floor leader of the PP, said Ahn will do his best to support Yoon. "It is safe to expect Ahn and Yoon will work together," she said.

Kwon also mentioned that Ahn had tried to recruit Yoon as a proportional lawmaker candidate in the 2016 general elections, but Yoon politely turned down the offer. Kwon claims their alliance is still possible in the near future because they share many values.

"At the time, Ahn and Yoon were on the same page when it came to justice and fairness," Kwon said. "Even now, they have the same views on the problems of the prosecutorial reform [pushed forward by the Moon administration] and how to improve the process."

But Ahn has not contacted Yoon directly, Kwon said: "After Yoon stepped down from his post, I have contacted him and relayed a message to Ahn."

Rep. Lee Tae-kyu of the PP said Thursday that Ahn and Yoon will likely meet before the April 7 by-elections.

"Ahn has promised the people that he will serve as a bridge for an opposition victory in the presidential election," Lee said in an interview with TBS. "So it is natural for Ahn to contact Yoon."