With former Prosecutor General Yoon Seok-youl nominated as the presidential candidate of the main opposition People Power Party (PPP) Friday, he will now be vying against three other contenders — the ruling Democratic Party's (DP) Lee Jae-myung, People's Party's Ahn Cheol-soo and Justice Party's Sim Sang-jeong — in the election next March.

After results were announced at the national convention held at the Kim Koo Museum and Library in Yongsan District, central Seoul, Yoon said, "We are now one team," pledging unity for a change in administration, and saying he will stand for a "recovery of equity and justice."

In an apparent show of solidarity of the conservative party, Hong and the other candidates immediately accepted defeat and expressed their support for Yoon despite some rocky patches in debates leading up to the PPP primaries.

The party's membership recently doubled in size and the primaries also saw a record-high voter turnout of 63.9 percent. 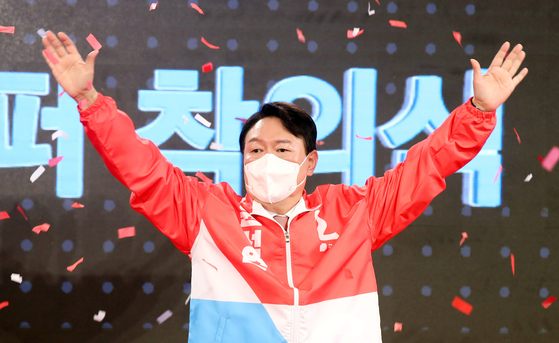 Yoon Seok-youl waves to the crowd at the Kim Koo Museum and Library in Yongsan District, central Seoul, Friday, after he is named as the main opposition People Power Party's candidate for next year’s presidential election. [JOINT PRESS CORPS]

So-called kingmaker Kim Chong-in is reportedly expected to lead the PPP's election campaign committee. Kim, the former interim leader of the PPP since June 2020, left the position after a landslide victory for the conservatives in the by-elections for the Seoul and Busan mayoral seats in April and had stayed out of the political limelight since. Kim, in a previous interview, noted that the presidential election next year "will be a confrontation between Yoon Seok-yeol and Lee Jae-myung," expressing his support for the former prosecutor general.

PPP Chairman Lee Jun-seok and Yoon reportedly agreed on ways to get Kim to chair the election campaign committee in a luncheon meeting in Mapo District, western Seoul, Saturday, according to a party official. There are expectations that Kim will accept the position some time later this month.

Yoon in a Facebook post posted Sunday noted that Hong "shone brighter than me, and his short message and smile touched my heart," stressing his one-team vision for the election campaign.

Hong immediately accepted defeat, unlike the runner-up in the DP primary race, former Prime Minister Lee Nak-yeon, who contested the results for days.

However, Hong appeared to draw the line at taking part in the PPP election campaign committee. Hong wrote on his Facebook Sunday, "I have no intention of participating in an election with corruption allegations led by the prosecution for the first time in history," adding his "role" has ended following the successful primaries of his party.

Instead, Hong said he will focus on a platform to support young people who strongly supported him during the primaries.

As the presidential campaign period is now set to kick off in earnest, both the ruling and main opposition candidates face a good deal of scrutiny, with allegations related to them being probed by the prosecution.

Yoon claimed the race is set to be a face-off between him and Lee in his primary results acceptance speech Friday saying, "This presidential election is a battle between the common sense of Yoon Seok-yeol and the irrational Lee Jae-myung."

Lee and Yoon have been neck-to-neck in recent popularity polls.

Yoon, a political rookie who served in the prosecution for 27 years, became the conservative presidential candidate just eight months after resigning as prosecutor general in March following clashes with the Moon Jae-in administration. He officially joined the PPP in July.

Lee, who has roots as a young factory worker and is self-made, served as Seongnam mayor from 2010 to 2018 and Gyeonggi governor from 2018 until last month, but has no experience in the central government or parliament.

This marks the first time the frontrunners of the ruling and main opposition parties are outsiders to the Yeouido National Assembly scene. Previous presidents since 1987 have all served as lawmakers, including President Moon Jae-in.

Both candidates are also tasked with winning the support of young people in their twenties and thirties who could be the pivotal voting group for next year's elections.

Ahn, chairman of the minor opposition People's Party and a former medical doctor and anti-virus software company entrepreneur, declared his presidential bid on Nov. 1. Despite a history of dropping out of races to support other candidates, Ahn said he doesn't have any plans of unifying with the PPP this time around.

Sim a former labor activist and longtime advocate of workers' rights, who has served as her party's chief twice, has made three previous presidential bids.

Yoon did not schedule any public activities Sunday to instead focus on forming an election campaign committee.