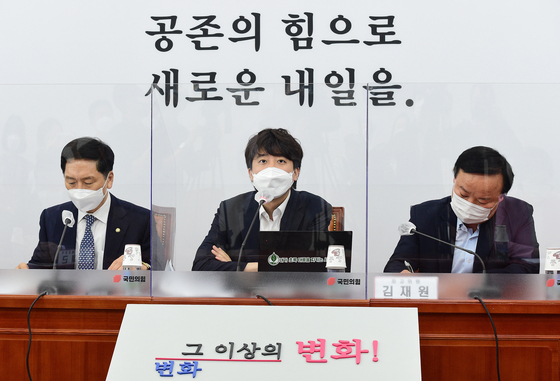 
The People Power Party (PPP) on Thursday finalized plans for a primary to nominate a candidate for next year’s presidential election.

According to the main opposition party, its leadership finalized the formation of the Presidential Primary Preparation Committee and decided on its 11 members.

Nine other members include Rep. Kwon Young-se, a senior lawmaker who has been contacting potential contenders from outside the party.

The committee will be in charge of most preparations for the primary except its rules. The Supreme Council will decide on those.

According to the PPP’s constitution and rules, the party must nominate a candidate 120 days before the March 9, 2022 presidential election, or before Nov. 9. Once the PPP nominates its candidate, the party will form a presidential campaign team within 60 days.

Earlier in the morning, PPP Chairman Lee Jun-seok said presidential contenders from outside the party, such as former Prosecutor General Yoon Seok-youl and former Board of Audit and Inspection head Choe Jae-hyeong, will likely contest in the primary.

In an interview with KBS Radio, Lee said he thinks Yoon will join the PPP by late August. “When you miss a bus, it is not easy to take a taxi to catch it at the next stop,” Lee said. “It is up to him whether he will board the bus in advance or at the last minute, but he will ride the bus.”

Asked about Yoon forming a party of his own following a meeting with People’s Party Chairman Ahn Cheol-soo on Wednesday, Lee said, “If Yoon thinks so, that is his political judgement. If I were him, I wouldn’t make that decision.”

On Choe, Lee said, “Many people inside our party speak highly of him, and there are a significant number of people who said they will actually help him.”

Lee said he plans to narrow down contenders to four finalists through elimination rounds. “The Democratic Party said they will select six [to run in a main primary],” Lee said. “Six will be too many for us. Personally, I am thinking four.”

So far, 14 politicians are known to have presidential ambitions in the opposition. Among them, nine are PPP members including Jeju Governor Won Hee-ryong, former Rep. Yoo Seong-min and former Prime Minister Hwang Kyo-ahn. Reps. Hong Joon-pyo and Yoon Hee-sook are also running.

Lee said the current presidential primary rules will likely be maintained. As of now, the PPP has a rule to nominate a presidential candidate based on a public opinion poll and a poll of party members. “Unless all candidates agree, it’s unlikely the rule will be changed,” he said.