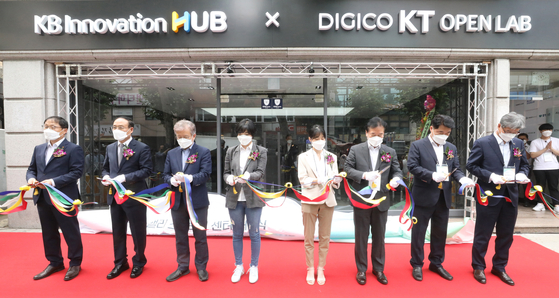 
Telecom operator KT has opened a start-up incubating center in Seoul’s Gwanak District, hoping to turn the area — best known as the home of Seoul National University (SNU) — into a hub for spearheading accelerator programs.

The seven-story building is a part of a joint project with the Seoul city government, the university and KB Financial Group to turn the Gwanak area into a start-up hub.

The city government has committed to inject 10 billion won ($8.7 million) through 2024 and SNU will invest 10.5 billion won. KT declined to comment how much it has invested in the project.

While the participating companies — KT and KB Financial Group — will be focused on supporting the infrastructure SNU will use to connect its students and alumni with the programs.

Seven start-ups that passed KT’s screening process will be the first to use the building.

Most of the tech firms are headed by SNU alumni.

The carrier said that the center will become a central point for the start-ups for sharing knowledge and networking.

The KT CEO expressed his willingness to work with the start-ups in developing different services.

“We aim to develop promising start-ups into unicorns and maintain a virtuous cycle of strengthening the competitiveness of KT’s digital platforms with them,” he said.