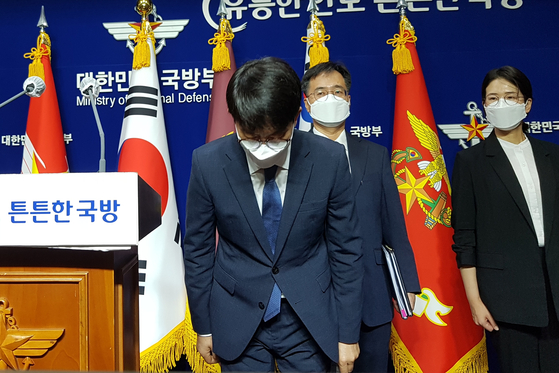 Vice Minister of Defense Park Jae-min bows on Friday to apologize after announcing the results of an investigation into a suicide of an Air Force officer after a sexual assault. [YONHAP]


Military prosecutors indicted 10 people for sexual assault, intimidation, evidence destruction and defamation after the suicide of an Air Force officer who was sexually harassed.

Vice Minister of Defense Park Jae-min announced the interim results Friday of an investigation into the suicide of a female officer in the 20th Fighter Wing in May.

According to Park, a team investigated 22 suspects and indicted one Air Force officer for sexual assault and intimidation and two others for intimidation and ordered them detained. Seven others were indicted for evidence destruction and defamation without physical detention.

A master sergeant, surnamed Lee, committed suicide on May 21, three months after she was allegedly groped and suffered other abuse by a colleague of the same rank, surnamed Jang.

Lee's relatives uploaded a petition to the Blue House website on May 31 urging an investigation into her death and the sexual harassment that they believe led her to take her life. Jang was arrested in June, but only after the media started reporting the case.

Jang was indicted for sexual assault and detained, Park said.

A warrant officer and a senior master sergeant, who were supervising officers of the unit, were also indicted for intimidation. Although Lee reported the sexual assault to them, they pressed her not to formally complain, Park said.

They reportedly told Lee she would face disadvantages if she complained. They also contacted her boyfriend and asked him to persuade her to not file a formal complaint, Park said.

The probe is still continuing into 12 other individuals involved in the case.

Separate from the indictments, the investigation team asked the military to take disciplinary action to dismiss nine military members including the chief of the 20th Fighter Wing.

All suspects in the case will be kept as active-duty military members, meaning they will be tried in a military court. “In addition to the criminal punishments, we will also enforce separate administrative punishments,” Park said.

The Ministry of National Defense will also overhaul the military investigation and court martial systems. Military prosecutors will be directly supervised by Army, Air Force and Navy chiefs of staff. A sexual crime investigation team will be established.

Military courts of the Army, Air Force and Navy will be integrated into a military court under the Ministry of National Defense, and a court exclusively handling sex crimes will be created.

The ministry also said it plans to hand over appeals to the judiciary outside the military.