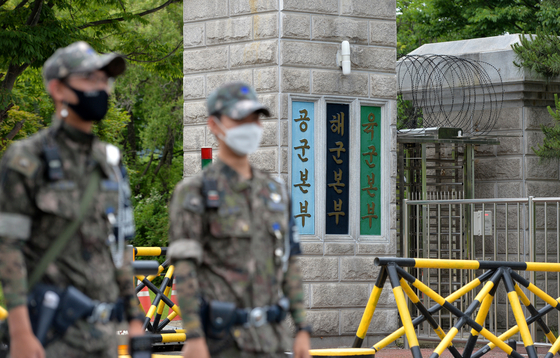 The entrance to the Air Force headquarters in Gyeryongdae, South Chungcheong. The force is under investigation for its handling of a sexual harassment case which led to a female officer committing suicide. [KIM SEONG-TAE]


The Air Force's headquarters in Gyeryongdae, South Chungcheong, did not submit a proper report to the Defense Ministry regarding the case of sexual harassment brought forward by a female officer who later committed suicide, according to military sources on Monday.

Although the victim — a sergeant stationed at a base in Seosan, South Chungcheong — was sexually harassed by a male master sergeant after a work dinner in March and reported the incident to the force’s gender equality center three days after the incident, the center did not immediately send a report to the ministry’s office of gender equality.

According to a military source who spoke on the condition of anonymity, the center is obliged to provide personal details of those involved in the case of an immediate report. “It appears the center did not submit an immediate report in order to avoid divulging that information,” said the source.

The center did eventually relay the incident to the office of gender equality policies at the Defense Ministry on April 6, about a month after receiving the victim’s report.

However, it was merely included as part of the center’s monthly update to the office, with no further details other than the fact that an incident of sexual harassment had been reported.

Following the sergeant’s suicide and the apparent failure of the system to report and respond to sexual violence cases, the Defense Ministry will launch an audit of three units — the Air Force headquarters’ gender equality center, the 20th Combat Squadron and the 15th Special Mission Squadron — according to military sources.

General Lee Seong-yong, chief of staff of the Air Force, offered his resignation to President Moon Jae-in on Friday and will step down from his post over the force’s failure to respond to the sergeant’s reports.

According to the Defense Ministry, Lee received a briefing on the sexual assault complaint on April 14, 43 days after the alleged crime took place. The Air Force, however, sat on the case for more than a month. Lee briefed Defense Minister Seo Wook on May 25, after the victim committed suicide.

The resignation of Lee, appointed as the Air Force chief of staff in September 2020, came only one day after Moon ordered a thorough investigation of the Air Force over its handling of the sexual harassment case.

The death of the female Air Force sergeant received widespread public attention after her family uploaded a petition to the Blue House website on May 31, urging an official reckoning over her death and the sexual harassment which they believe led her to take her own life. The petition garnered over 217,000 signatures by June 1, passing the quota for a presidential response.

They also raised new allegations on Monday that the other officers they named in their criminal complaint had helped cover up at least two other instances of sexual harassment against her in the past.

During a Memorial Day speech at Seoul National Cemetery on Sunday, President Moon Jae-in vowed to rid the military of its “backward culture.”

That same day, Moon Jae-in also paid tribute at the mourning altar for the officer in Seongnam, Gyeonggi.