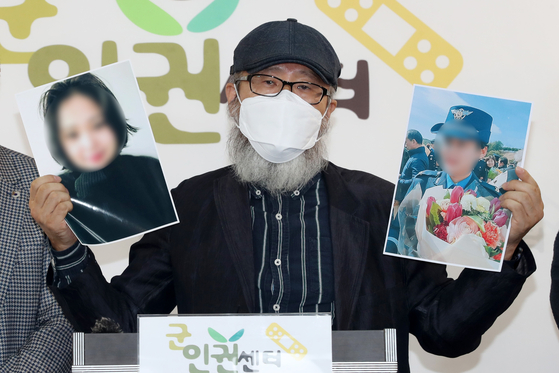 The father of the female Air Force staff sergeant who took her own life due to sexual harassment from her unit holds photographs of his daughter as he calls for an independent counsel investigation into her death at a press conference held by the Military Human Rights Center in Mapo District, western Seoul, on Sept. 28. [NEWS1]


The military's probe into the suicide of a female Air Force staff sergeant who suffered from sexual harassment closed with 15 personnel being indicted, the Defense Ministry said Thursday.

While the ministry handed down disciplinary measures to a total of 38 people in the case, sparking public outcry over the military’s attitude towards sexual crime in the armed forces, it only indicted 15 people out of 25 individuals who were booked over their involvement in the case.

The criminal charges against the other 10 were dropped for lack of evidence.

Notably, the Defense Ministry did not bring indictments against military police or prosecutors at the 20th Fighter Wing who initially handled the sexual harassment report brought forward by the victim — only identified by her surname Lee — nor those in command of the military’s legal affairs bureau, despite accusations that they neglected reports of the incident.

Public criticism of the military has focused on the possibility that the female officer may not have taken her own life if the Air Force had properly responded to her report of sexual harassment in a timely manner. Both Defense Minister Suh Wook and President Moon Jae-in promised justice for the deceased victim.

While the Defense Ministry did indict the head of the Air Force Headquarters’ military police division, he only faces the charge of submitting a false report in relation to the case — meaning that no one will be indicted for mishandling the victim’s initial report before she died on May 22.

Lee, a former Air Force sergeant stationed at the base of the 20th Fighter Wing in Seosan, South Chungcheong, reported being sexually harassed by a male master sergeant after a work dinner in March, which he pressured her into attending even despite Covid-19 restrictions on such gatherings.

Although Lee submitted a complaint three days after the incident, the Air Force’s gender equality center did not immediately send a report to the ministry’s office of gender equality, reporting the incident only as part of a regular update a month later in April.

According to the Military Human Rights Center, a civic group that reports on rights violations in the armed forces, the Air Force Headquarters' military police team initially stated on May 23 that a victim of sexual harassment had died, but the colonel at the head of the military police team prevented that wordage from being used.

The civic group’s chief Lim Tae-hoon said in a press conference on June 21 that the head of the military police team told the person in charge of the case four times to delete the fact that the deceased was a victim of sexual harassment. “The colonel essentially ordered a false report to be filed to the Defense Ministry,” Lim said.

The lack of indictments against those who failed to relay and respond to Lee’s sexual harassment report before she died has outraged her surviving family members.

“I trusted the president’s word and followed the investigation,” said the victim’s father, who has kept vigil by her funerary altar since she died, in a phone interview with Yonhap News. “Since the results of the probe were announced, I can only shed tears of blood.”

The victim's father on Sept. 28 called for an independent counsel investigation into her death in a press conference hosted by the Military Human Rights Center, saying he could not trust the military's probe.