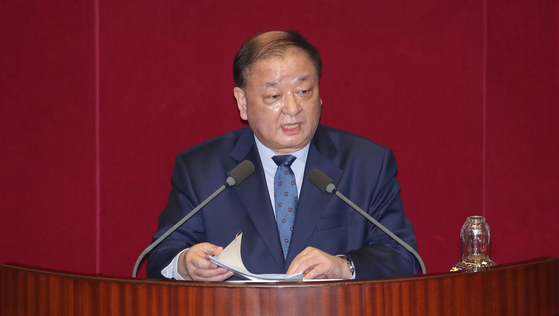 Rep. Kang Chang-il of the Democratic Party speaks at the National Assembly on March 2, 2020. President Moon Jae-in named Kang, now a former four-term lawmaker, as the new ambassador to Japan to seek a political resolution to the strained Korea-Japan relations. [YONHAP]


Kang Chang-il, a seasoned politician from the ruling party and the honorary chairman of the Korea-Japan Parliamentarians' Union, was named the new ambassador to Japan, the Blue House announced Monday.

“We anticipate that Kang will find a breakthrough in the strained Korea-Japan relations based on his expertise, experience and high-level networks built for years, and will create an opportunity for future-oriented bilateral ties in time with the launch of the new administration of Prime Minister [Yoshihide] Suga,” presidential spokesman Kang Min-seok said.

The new ambassador will be formally appointed after the receiving country’s Agrément procedure.

Kang, 68, is a former four-term lawmaker from the Democratic Party (DP). He is also a historian who obtained his master's and doctoral degrees from the University of Tokyo. During his career as a lawmaker, Kang served as the secretary-general and chairman of the Korea-Japan Parliamentarians' Union.

A senior presidential aide said Monday that Moon was sending a signal to Japan that he wants to restore Korea-Japan relations, now that a new cabinet has been established in Japan.

“Kang has built a strong network with powerful Japanese politicians and officials,” he said. “Moon believes that a politician, not a diplomat, will be better for this job of restoring the bilateral ties.”

Kang will replace Nam Gwan-pyo, who served in the post for 18 months during the Shinzo Abe administration. Nam is a career diplomat.

A native of Jeju, Kang served as a researcher with Japan’s University of Tokyo after he finished his studies. He was a professor of Japan studies at Pai Chai University until he started a political career in 2004. He won his first legislative election that year as a candidate of Uri Party, a predecessor of the DP, and was re-elected to the seat three times.

After his fourth term, Kang declared in January that he would not run in the 2020 legislative election.

“New faces must enter the National Assembly to face the era of the fourth industrial revolution,” he said at the time.

Bilateral relations have deteriorated since Moon took office and scrapped an agreement to settle the issue of Japan's wartime sexual enslavement of Korean women, signed in 2015 by his predecessor. The diplomatic rift worsened after the Supreme Court of Korea ruled in 2018 that Japanese companies must pay compensation to individual Korean victims of wartime forced labor.

The dispute eventually developed into a tit-for-tat trade spat between Seoul and Tokyo. The Moon administration also threatened to withdraw from a military intelligence-sharing pact with Japan, although it did not.

Over the past years, Kang tirelessly sought to thaw icy relations by visiting Japan and meeting with Japanese politicians, although progress has been elusive.

Following Suga’s election in September, the Moon administration renewed its campaign to restore ties with Tokyo. Moon and Suga had their first phone conversation on Sept. 24 and confirmed their intentions to mend the rupture.

On Nov. 8, Moon sent Park Jie-won, head of the National Intelligence Service, as a special envoy to Suga and discussed a possible resolution to the current deadlock.

A seven-member delegation of bipartisan lawmakers led by DP Rep. Kim Jin-pyo also took a three-day trip to Tokyo earlier this month. The delegation met with Suga on Nov. 13. They
also met with politicians and lawmakers in the Parliamentarians' Union.

“The Moon administration has drafted a masterplan to resolve inter-Korean relations, North-U.S. relations and North-Japan relations by using next year’s Tokyo Olympics as an opportunity,” said Lee Won-duk, professor of Japan studies at
Kookmin University.


Lee said Suga also wants to differentiate his foreign policy from that of Abe, and the key will be the Korean Peninsula issue. “Because the success of the Olympic Games is directly linked to the political fate of the Suga administration, now is a great time to improve Korea-Japan relations.”