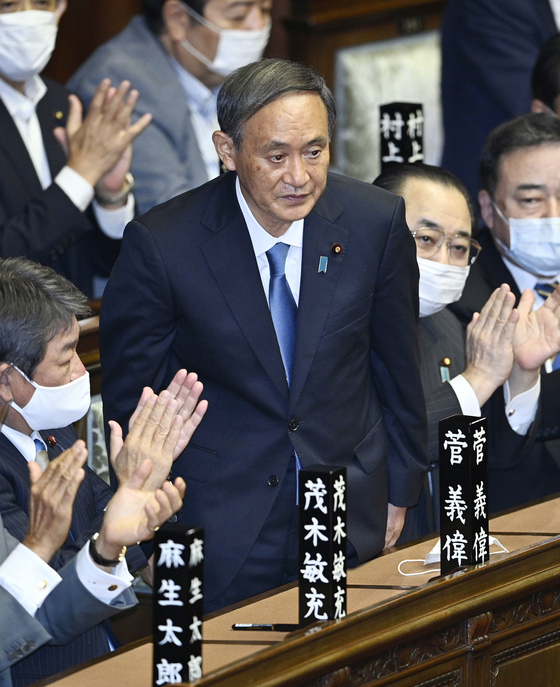 Yoshihide Suga, center, stands after being elected Japan's new prime minister in Tokyo on Wednesday. Suga, the new leader of the ruling Liberal Democratic Party, was chosen to succeed Shinzo Abe in an extraordinary parliamentary session on Wednesday. [YONHAP]

"The president is ready to sit down for a summit anytime with his counterpart from Japan, Korea's closest friend culturally and geographically and a neighbor that shares fundamental values and strategic interests," Kang continued. "We hope for a positive response."

The Korean government hopes Suga and his new cabinet will find reasonable resolutions to thorny historical issues, Kang said. "We hope to strengthen future-oriented and mutually beneficial cooperation in all areas including the economy, culture and people-to-people exchanges," Kang said.

Earlier in the day, Japan's parliament elected Suga as the country's 99th prime minister to succeed Shinzo Abe, who announced his resignation last month. On Monday, Suga was elected the leader of the ruling Liberal Democratic Party (LDP).

Korea and Japan share a bitter history, including Japan's 1910-45 colonial rule of Korea. Enslavement of Korean women in wartime brothels and conscription of forced laborers have been particularly thorny issues.

Bilateral relations have deteriorated since Moon took office and scrapped an agreement to settle the issue of Japan's wartime sexual enslavement of Korean women, signed in 2015 by his predecessor.

The diplomatic chill worsened after the Supreme Court of Korea ruled in 2018 that Japanese companies must pay compensation to individual Korean victims of wartime forced labor. The dispute eventually spilled over to a tit-for-tat trade spat between Seoul and Tokyo. The Moon administration also threatened to withdraw from a military intelligence-sharing pact with Japan, although it didn't.

Speculation grew that the two leaders could meet in coming months.

Korea is the host of the Korea-China-Japan trilateral summit this year, and Seoul has left open the possibility of holding the event despite the Covid-19 pandemic. If that trilateral summit takes place, Moon and Suga are expected to have a bilateral meeting on the sidelines.

Asked about the trilateral summit, a senior presidential aide said Wednesday that it is premature to talk about it since Suga just took office. "Please wait and see," he said.

Another possibility of a summit between Moon and Suga exists if both attend a Group of 7 (G7) summit in the United States, scheduled to take place after the country's presidential election in November. U.S. President Donald Trump has invited Moon, and Moon has accepted the offer. Japan is also a member of the group.

Rep. Lee Nak-yon, chairman of Korea's ruling Democratic Party (DP), expressed hopes for better Korea-Japan relations. "I send my congratulations to Prime Minister Suga and the Japanese people," Lee said during a party leadership meeting in the morning. "I wish the best for Japan and hope for an improvement in Korea-Japan relations."

Suga is expected to follow the polices of his predecessor, Abe. His new cabinet includes many members of the Abe administration, including the foreign minister.

Among the 20 cabinet members, eight ministers from the Abe administration kept their seats, while three were moved to different posts in the Suga cabinet.

Joining the cabinet was Nobuo Kishi, younger brother of Abe. He will be the new defense minister.

Criticisms were reported in the Japanese media that Suga, who pledged reform, is relying on many associates of his predecessor and following the factionalism-based politics of the LDP.

Earlier Wednesday, Abe held his final cabinet meeting. Abe served 2,822 days in his second term since Dec. 26, 2012. Including his first term, he served 3,188 days, making him the longest-serving prime minister of Japan.

According to Kang, Moon also sent a letter to Abe to express his warm wishes for a speedy recovery from the ill health that caused him to resign. Abe and his wife had also sent letters to Moon and his wife, Kang said.