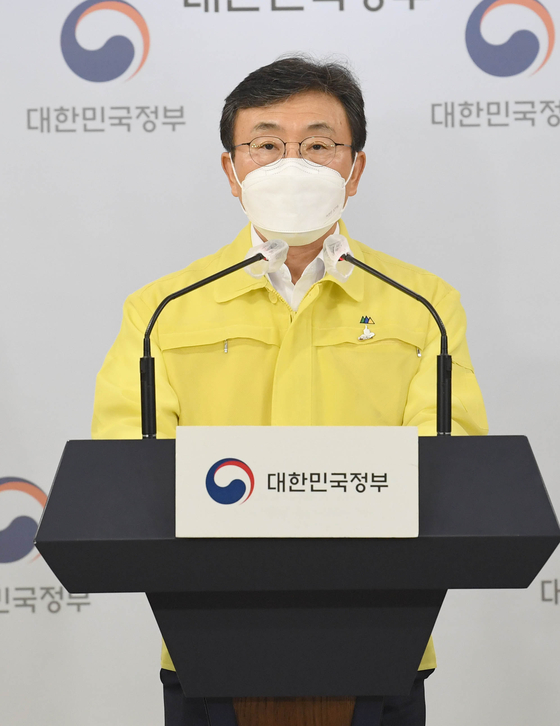 Health Minister Kwon Deok-cheol announces heightening of social distancing measures in Korea to Level Four at a pres briefing in Seoul on Friday. The measures go into effect from Monday. [JANG JIN-YOUNG]

They ban all private gatherings of more than two people after 6 p.m. from Monday and require schools to send kids home and hold classes virtually from Wednesday.

“Starting July 12, Level Four measures will be in place for two weeks in the greater Seoul area,” said Health minister Kwon Deok-cheol in a press briefing Friday at the government complex in central Seoul.

“In other words, we are asking everyone to stay at home and minimize their contacts with other people, unless they are absolutely required.”

Violators will be fined, according to the health ministry.

“Facilities will have the weekend to make preparations to start implementing the social distancing measures starting Monday,” Kwon said.

The current 10 p.m. curfew for restaurants, bars and cafes will remain. Bars that involve dancing and clubs are banned from operating at all, starting Monday.

Churches and religious facilities have to hold services virtually.

All public events are banned including protest rallies. Sport events will have to be streamed live without spectators.
Until this week, the government had made exceptions for gatherings of immediate family members, allowing up to eight members to gather at once.

That exception is scrapped starting Monday.

Schools will have to hold classes virtually starting Wednesday, the Education Ministry said.

“Kindergartens, elementary, middle and high schools, as well as schools for students with special needs, in Seoul, Gyeonggi and Incheon will have to hold classes virtually for the rest of the semester before the summer vacation,” said Yoo Eun-hae, education minister, at the briefing. “The ministry and local education offices will do our best to ensure that no student is left behind in this virtual learning environment.”

Weddings and funerals can host up to 49 attendees, and only relatives will be allowed to attend.
Korea added 1,316 new infections Friday, the highest number in a single day since the start of the pandemic in January 2020.

The second-highest was 1,275 on Thursday and the third-highest was 1,240 last Christmas day.
Of the new cases on Friday, 1,236 were local cases, of which 77.9 percent were in the greater Seoul area -- 495 in Seoul, 396 in Gyeonggi and 72 in Incheon – according to the Korea Disease Control and Prevention Agency (KDCA).

With the spike in cases, the government announced earlier in the week that Korea has entered a fourth wave of the Covid-19 pandemic.

Of the infections in the greater Seoul area from June 27 to July 3, 12.7 percent were by the Delta variant, about three times higher than the proportion the week before, according to the KDCA.

As of last Tuesday, a total of 263 people had been infected with the Delta variant in Korea. Health authorities update the number of variant cases on Tuesdays.

“We hope that this will be the last wave of infections that Korea experiences before it gets around 70 percent of its population vaccinated with at least one shot by September,” Kwon said.

As of Friday, 30.2 percent of the population had received at least one vaccine shot, according to the Health Ministry.

When it's over in China, it's over

A return to the days of the Cultural Revolution

A return to the days of the Cultural Revolution (KOR)