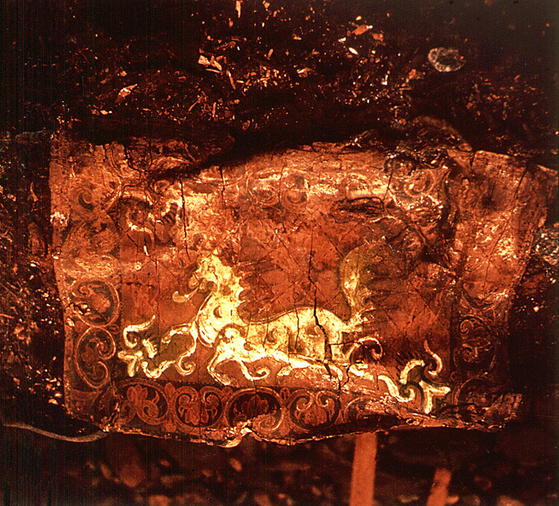 Pictures that include birds and animals are called yeongmohwa in Korean.

This picture is one of them, which was excavated in 1973 from the Cheonmachong Tomb located in Ancient Tombs of Hwangnam-dong, Gyeongju.

This picture of a white flying horse was drawn on the mudguard flap, measuring 75cm by 53cm and made of birch bark that hangs down from the saddle. It was produced during the fifth and sixth century Silla (57 B.C. to A.D. 935).

This mudguard flap was made of layers of birch bark hemstitched with leather. In the center there is a white horse flying into the sky decorated with patterns of bindweeds on all sides. They are mostly brown, red, white, and black. Looking at the flying white horse further in detail, the tail is turned upward, each of the four legs have projected ring-shaped hooks, and the tongue is sticking out. We can guess that the white horse was a god with a mission of transporting the dead to the heavenly world.

This picture seems to have followed the same pattern of the mural paintings that can be found in ancient tombs of the Goguryeo (37 B.C. to A.D. 668), and it is considered as the most valuable and unique one that represents Silla paintings.