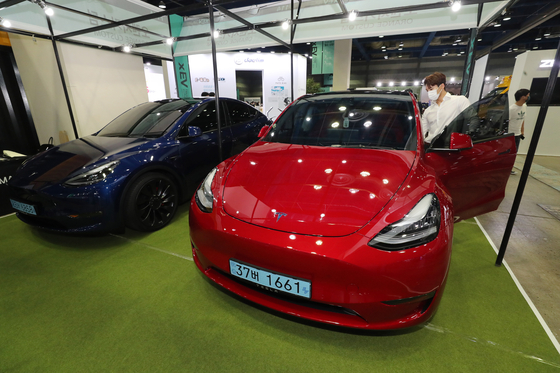 Tesla models on display at an electric vehicle form held in Seoul in June. [NEWS1]

Tesla rules Korea’s electric vehicle (EV) market, accounting for 43 percent of all passenger EVs sold in the first half of this year.

The Palo Alto, California-based brand accounted for 81.4 percent of all imported EVs sold in Korea during the same period.

Tesla sold 11,629 units in Korea in the first half, recording 64.3 percent year-on-year growth, according to sales figures from CarIsYou, a Seoul-based auto market tracker.

Tesla’s Model Y SUV, which launched in Korea in February, came in second with 5,316 units sold. 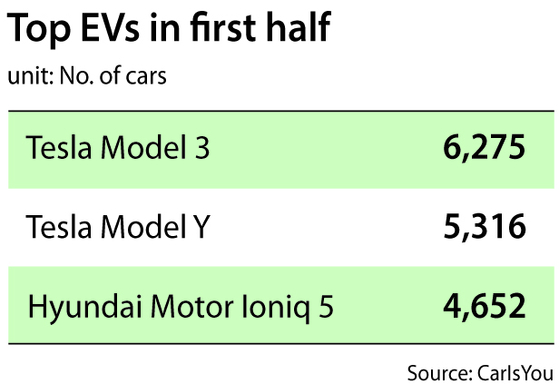 Model X, which became ineligible for government subsidies this year due to its high price, sold 20 units in the country in the first half.
Korea’s EV market was dominated by imports during the Jan.-June period as they offered a more diverse lineup compared to domestic carmakers.

A total of 26,632 units of electric passenger cars were sold in Korea in the first half, 53.7 percent of which were imported brands.

Sales of imported EVs including Tesla cars increased by 64.7 percent year-on-year this year as of June.

The Taycan ranked seventh in Korea’s EV market in the first half, shipping 915 units, despite a sticker price that starts at 145.6 million won. It is not eligible for government subsidies either.

Mercedes-Benz’s EQC SUV, its first EV model, came in ninth with 337 units sold. It was first sold in Korea in 2019

Hyundai Motor’s Ioniq 5, the Korean carmaker’s first EV model to be made on a dedicated E-GMP platform, sold 4,652 units in the first half, coming in third after Tesla’s Model 3 and Model Y.

Deliveries of Ioniq 5s were delayed due to a shortage of auto chips and core components that lead to a partial shutdown of Hyundai Motor’s Ulsan factory.

Tesla’s dominance may be challenged in the latter half of the year as production at Hyundai Motor’s Ulsan factory is back to normal and a slew of new EVs are expected to hit the market.

Kia’s EV6, a direct rival to Tesla’s Model Y, will launch in July.

Mercedes-Benz’s EQA compact electric SUV and EQS sedan will hit the market later in the year. BMW will bring in two electric models – the X3 and the iX3 – in the latter half.