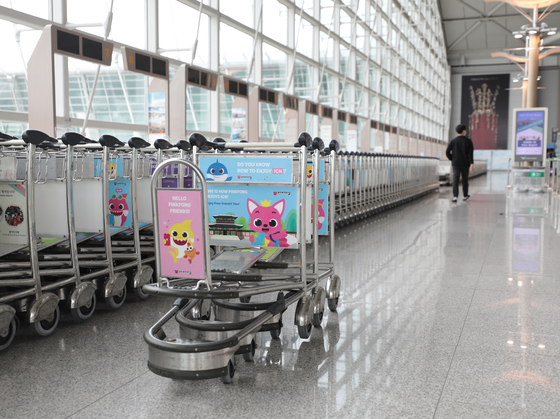 Unused carts lined up at Terminal 1 of Incheon International Airport on July 7.[NEWS1


Neither airlines nor tour companies are counting on the Saipan travel bubble.

While they are welcoming the government’s first arrangement for limited quarantine-free international vacations, they say the program agreed to is just too complicated for most travelers.

The adoption of Level 4 social distancing restrictions in the greater Seoul area, which started Monday, has not helped matters.

A travel bubble is an agreement between two or more countries or regions to allow people to travel between them without having to quarantine upon arrival at the destination and upon return.

Korea and the Commonwealth of the Northern Mariana Islands, where Saipan is situated, signed a travel bubble agreement for vaccinated visitors on June 30. The agreement is set to go into effect in late July or early August, allowing travelers to visit the U.S. island 4.5 hours by air from Incheon without having to quarantine.

“We didn’t expect the travel bubble to dramatically increase demand for travel because there are too many restrictions,” said Jeong Gi-yun, a spokesperson for Hana Tour, the largest travel company in Korea. “All travelers have to be vaccinated, and they have to take PCR tests at least three times.”

The first test, done in Korea before departure, has to be translated into English. Jeong said that this alone costs around 200,000 won ($175).

Yook Hyun-woo, general manager at Mode Tour, agreed that the “restrictions are too tight.”

He added that Level 4 social distancing “does not seem to have a direct impact on the travel industry, but we are concerned that quarantine restrictions for the next travel bubble agreements could be tough if they are signed in the time of the stricter quarantine measures.”

At the same time, the restrictions could also assure travelers that they can travel abroad safely, Yook added.

Airlines say they welcome travel bubble because it could generally raise demand for travel, but they do not see the program as being very profitable.

Under the Saipan travel bubble, only group tours via a travel company are allowed.

Yang added that at this point boosting the general demand for travel is more important than who gets a bigger share of the profit.

Air Busan, which plans to offer a flight to Guam under a travel bubble in September, said non-vaccinated young children limit demand for group travel.

“Saipan and Guam are destinations people often go as families,” said Park Jin-woo, a spokesperson for Air Busan. “But with children not yet vaccinated, demand for the travel bubble to these destinations cannot yet be high.”

“Travel bubbles are symbolic in the recovery of the travel business, but they are not expected to realistically boost demand, especially amid the Level 4 social distancing restrictions.”

Korea and Guam have not yet signed the travel bubble agreement, but the U.S. territory could be one of the next destinations.

“The government plans to continuously push forward the travel bubble program with other countries despite the toughened measures,” a spokesperson for the Ministry of Land, Infrastructure and Transport said.