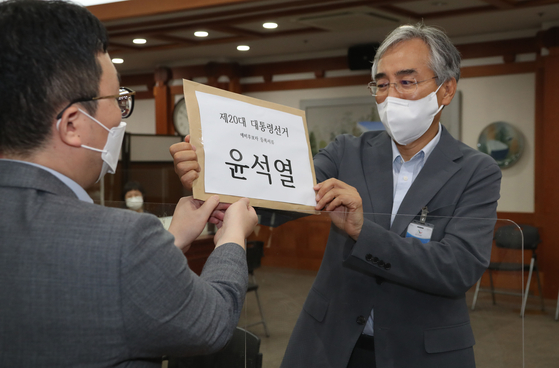 According to a poll conducted Friday and Saturday by the Korea Society Opinion Institute, former Prosecutor General Yoon was ranked the highest with 29.9 percent and Gyeonggi Governor Lee Jae-myung, a member of the ruling Democratic Party (DP), was second with 26.9 percent.

Former Prime Minister Lee Nak-yon, who served as chairman of the DP from August 2020 till March 2021, came in third with 18.1 percent. His score went up 5.9 percentage points from the previous week.

When asked who should be the next president from opposition candidates, Yoon scored the highest with 29.1 percent. Hong Joon-pyo, who ran for president in 2017 and lost to Moon Jae-in, scored 12.8 percent. Former Rep. Yoo scored 10.9 percent, Ahn 5.5 percent and Choe 4.3 percent.

The poll had a confidence level of 95 percent and margin of error of plus or minus 3.1 percentage points. More details are available on the homepages of the National Election Survey Deliberation Commission and the KSOI.

Meanwhile, candidate registrations for the March 2022 presidential election started Monday, and Yoon was the first to submit an application. Former Minister of Government Policy Coordination Lee Suk-joon, a key aide to Yoon, submitted the application on behalf of Yoon at the National Election Commission (NEC) in the morning.

Yoon registered his candidacy as an independent. It remains to be seen if he will take part in the PPP’s presidential primary.

According to the NEC, a person who registered his or her presidential candidacy will be allowed to start campaigning by opening an office and hiring up to 10 paid workers. Campaign activities such as promoting the candidate through phone calls, text messages and emails, distributing name cards and creating publications are also allowed.

Lee said Yoon's campaign is looking for a reputable person to be in charge of his fundraising.

He also said Yoon will form a presidential campaign team that isn't too big. “We want to run a small, but effective campaign,” Lee said.

From the DP, former Prime Minister Lee and another former prime minister, Chung Sye-kyun, were scheduled to register their candidacies with the NEC later in the day. 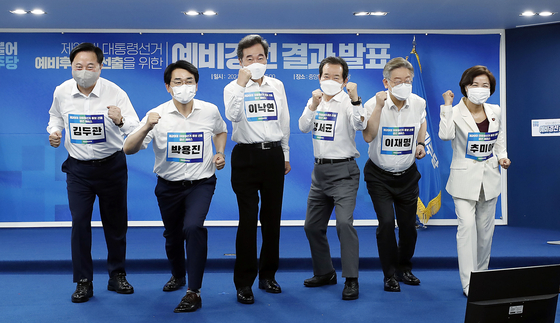 On Sunday, the DP announced that six out of eight candidates had passed the elimination round of its primary: former prime ministers Lee and Chung, Gyeonggi Governor Lee, Choo, Reps. Park Yong-jin and Kim Du-kwan.

Gyeonggi Governor Lee will take some time to resister his candidacy with the NEC since he is an incumbent governor. For an incumbent public servant to run for the election, he or she must resign before registering with the NEC.