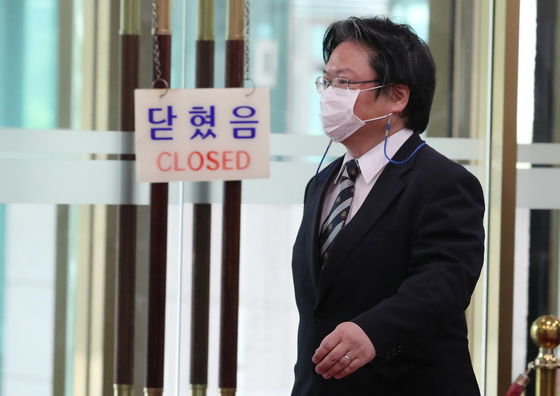 Soma Hirohisa, deputy chief of mission at the Japanese Embassy, is summoned to the Ministry of Foreign Affairs in central Seoul Tuesday after Tokyo renewed claims over Korea’s easternmost Dokdo islets in its annual defense white paper for the 17th consecutive year. [NEWS1]

The "Defense of Japan 2021," reported by Japanese Defense Minister Nobuo Kishi in a cabinet session led by Prime Minister Yoshihide Suga earlier that morning, described Dokdo, which it calls Takeshima, an "inherent part of the territory of Japan."

The white paper states that Japan has an "unresolved" territorial dispute over the islets, and maps included in the document label Dokdo in the East Sea as Japan's territory.

Korea, the spokesman added, expressed "strong regret" over the Japanese government's "recent intensification of its unjust claims over Dokdo," including in the latest defense white paper.

The Foreign Ministry said that the Japanese government's "unjust claims do not and will not have any impact on Korea' sovereignty over Dokdo," adding that Seoul "will respond strictly and firmly" to any provocations by Tokyo over the islets.

Seoul maintains that there is no territorial dispute as the Dokdo islets in the East Sea are historically, geographically and under international law an integral part of Korean territory.

Lee Sang-ryeol, director general for Asia and Pacific affairs at the Ministry of Foreign Affairs, summoned Soma Hirohisa, deputy chief of mission at the Japanese Embassy in Seoul.

Japan's latest claims over Dokdo come as the two sides have been discussing the possibility of a visit by President Moon Jae-in to the Tokyo Olympics next week and hold a first bilateral meeting with Suga in an attempt to thaw icy bilateral relations.

The Japanese annual defense white paper explains the security issues surrounding the country. Tokyo has been claiming Dokdo as its territory in these white papers since 2005, during the Junichiro Koizumi administration.

The new white paper, unlike previous years, focuses on an increase in South Korea's defense budget, which analysts say could be intended to provide a pretext to increase Japan's own defense spending.

The paper said that South Korea spent more than Japan in defense purchases in 2018 and predicted that its defense budget will be 1.5 times than that of Japan by 2025.

It dedicated a page to saying that the South Korean defense budget has increased for 22 consecutive years. It said Seoul's spending for 2021 increased by 5.4 percent compared to the previous year and that it plans to increase the budget by an average of 7.5 percent annually.

In this year's document, as in the 2020 paper, South Korea came fourth behind Australia, India and Asean on a list of Japan's defense cooperation partners aside from the United States.

The paper also noted sources of friction with Seoul, such as the South Korean Navy holding military drills in the waters surrounding the Dokdo islets, included in the paper for the first time this year.

Like last year, it mentions that the Korean government in November 2019 announced suspending its notification to terminate the bilateral General Security of Military Information Agreement, or Gsomia.

Seoul attempted to end its Gsomia with Tokyo after Japan's implementation of export restrictions on Korea in July 2019. Tokyo's trade restrictions were seen as a backlash against the Korean Supreme Court decisions in late 2018 ordering Japanese companies to compensate victims of forced labor during World War II.

The white paper also spent more time dwelling on the Sino-U.S. rivalry for the first time including that "stabilizing the situation surrounding Taiwan is important for Japan's security and the stability of the international community."

It said that it believes that North Korea already has the ability to attack Japan with nuclear weapons fitted to ballistic missiles and that such trends "pose grave and imminent threats to Japan's security." 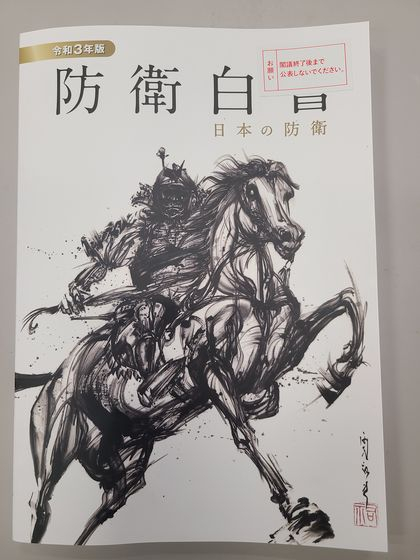 The cover of the latest defense paper featured an ink painting of a samurai riding on horseback in contrast to last year's of cherry blossoms and geometric patterns. Some observers see that as symbolic of Japan's intention to become a military power and turn away from its Peace Constitution, which renounces war.

While an annual event, the latest defense policy paper comes as Seoul and Tokyo struggle to find a way out of current diplomatic tensions, which have extended to trade and security affairs.

The paper also urges South Korea to resolve pending issues so as not to damage cooperation between Korea and Japan and trilaterally with the United States.

Moon has not yet decided whether to attend the opening ceremony of the Summer Olympics set for July 23. Seoul's Foreign Ministry has expressed disgruntlement over Japanese officials unilaterally leaking discussions over a possible Moon-Suga meeting to the press.

The Dokdo issue has been a source of tension even for the Tokyo Olympics. Its official website includes the islets as Japanese territory in a map of its torch relay route. Japan's refusal to remove Dokdo from the map has prompted some politicians to call for a boycott of the games.