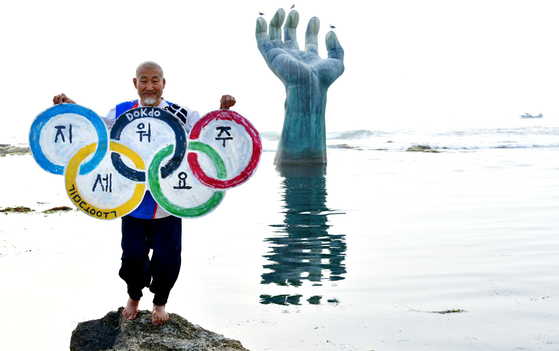 Calligrapher Kim Dong-wook in a performance Tuesday in Homigot, North Gyeongsang, calls for Japan to revise the Tokyo Olympics map to exclude Korea’s easternmost Dokdo islets. He wrote in another sign that “Dokdo was protected with the lives of our ancestors.” [NEWS1]


The Korean government is protesting a map on the Tokyo Olympics’ website showing the Dokdo islets in the East Sea as Japanese territory, and some are calling for a boycott of the Summer Games.

A map posted by Japan on the official Tokyo Summer Olympics website shows the route of its torch relay, and it includes Dokdo, represented by a small dot above Shimane Prefecture.

The Korean Ministry of Foreign Affairs summoned Hirohisa Soma, the deputy chief of mission at the Japanese Embassy in Seoul, Tuesday afternoon to lodge a protest over the map. In a rare move, the ministry announced his summoning ahead of time.

The two ministries and Olympic Committee held a meeting earlier that day to discuss responses to the issue including calling for the IOC to take an active mediating role.

Tokyo has rejected requests from Seoul to remove Dokdo from the Olympics website.

Seoul maintains that there is no territorial dispute with Japan as its easternmost Dokdo islets are historically, geographically and under international law an integral part of Korean territory. The Dokdo islets, controlled by Korea, also serve as a painful reminder of Japan's imperialistic past and its 1910-45 colonial rule over the peninsula. 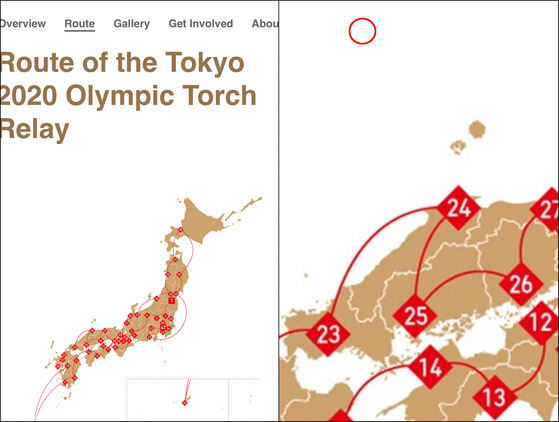 A map on the Tokyo Olympics website on the torch relay route shows the Dokdo islets in the East Sea as Japanese territory in a zoomed version of the map provided by Seo Kyeong-duk, a professor of Sungshin Women's University. [SEO KYEONG-DUK]

The Korean Foreign Ministry on May 24 requested an immediate revision of the Olympic map from the Japanese Embassy in Seoul after the issue started getting publicity in Korea. Bipartisan lawmakers have criticized the map.

Speaking in front of a parliamentary Foreign Affairs Committee last Friday, Foreign Minister Chung Eui-yong called Japan’s inclusion of Dokdo on the map “unacceptable” and confirmed that the government had filed a complaint with Tokyo.

This is not the first time the Dokdo map has been an issue with the Tokyo Olympics. In July 2019, the Korea government and civic organizations protested the inclusion of Dokdo on a map on the Olympics website and requested Japan revise it.

At that time, Dokdo was portrayed more prominently on the map. Rather than removing the islets, Japan revised the map to portray the islets as a smaller dot.

The map issue has particularly irritated the Korean public because for the 2018 PyeongChang Winter Olympics, the inter-Korean delegation in the opening ceremony carried a flag of the Korean Peninsula without Dokdo — for the sake of Japan.

Dokdo was removed from the Unification Flag after Seoul accepted an IOC request that followed a strong complaint from Tokyo. The IOC asked Korea to follow guidelines on political neutrality — which seems like a double standard now.

Seo Kyoung-duk, a professor of general education at Sungshin Women's University who is actively involved in issues related to Korean history and culture, said last week he sent a letter to Thomas Bach, president of the IOC, on May 21 raising the issue of Dokdo and the map.

Some Korean activists and heavyweight politicians are even calling for a boycott of the Tokyo Olympics, which are set to kick off on July 23.

In a May 26 Facebook post, former Prime Minister Chung Sye-kyun called for the removal of Dokdo from the map and, if Japan refused, said he might support a boycott of the games. Chung is a ruling party presidential candidate.

In a Facebook post last Thursday, former Prime Minister Lee Nak-yon, the former head of the ruling Democratic Party (DP),  proposed Korea take all measures such as boycotting the Tokyo Olympics if Japan refuses to back down.

On Saturday, in a meeting with South Chungcheong officials, former Prime Minister Chung went further and said “the Olympics should be boycotted with the consent of the people if there is no revision” by Japan.

On Tuesday, three Korean university students were arrested for burning the Japanese Army’s Rising Sun flag from World War II in front of the Japanese Embassy in central Seoul.

In a press briefing on Wednesday, Japan’s Chief Cabinet Secretary Katsunobu Kato again rejected Seoul's request to remove Dokdo, called Takeshima by Tokyo, from the map, claiming that islets are a part of Japanese “indigenous territory” based on history and international law.

He said the Olympic Charter calls on the IOC “to oppose any political or commercial abuse of sport and athletes.”

Japan has problems domestically with the holding of the Olympics as it struggles to contain the Covid-19 pandemic.

It is currently unclear whether Korean President Moon Jae-in and Japanese Prime Minister Yoshihide Suga will hold bilateral talks on the sidelines of an upcoming G7 summit in Britain later next week and whether the Dokdo issue could come up.

In 2012, Korean football player Park Jong-woo was denied his bronze medal and barred from the medal ceremony by the IOC at the London Olympics for holding up a banner that read, “Dokdo is Korean territory,” after a a game against Japan. He received the medal in February 2013 after a disciplinary hearing delivered a warning from the IOC. 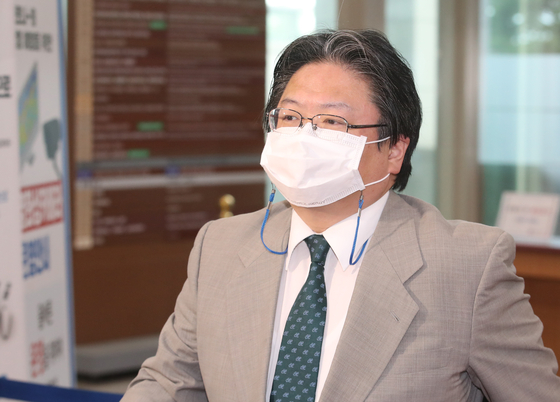 Hirohisa Soma, deputy chief of mission at the Japanese Embassy, enters the Korean Foreign Ministry in central Seoul Tuesday afternoon as Korea lodged a protest over a map including Dokdo as Japan’s territory on the Tokyo Olympics website. [NEWS1]