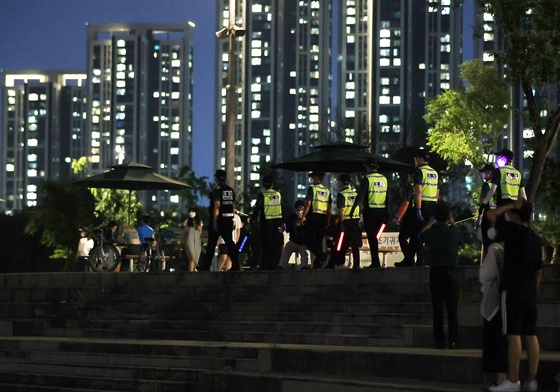 Policemen inspect a park along the Han River in Seoul on Sunday night. Drinking is banned outside in Seoul after 10 p.m. as part of strengthened measures to curb the spread of the coronavirus. [NEWS1]


Korea's fourth wave of Covid infections could become a tsunami as the number of Delta variants among newly infected patients more than doubled in a week.

“The detection rate of major virus variants from local Covid-19 infections over the past week is 36.9 percent,” the Central Disaster and Safety Countermeasure Headquarters said Tuesday.

"Of the total, the detection rate of the Delta variant was 23.3 percent, up from the previous week, and exceeding that of the Alpha variant [13.5 percent],” they added.

According to health authorities, a total of 536 patients were infected with the four major variant strains — Alpha, Beta, Gamma and Delta — over the past week.

The total number of variant cases in Korea reached 3,353 as of Tuesday.

Of the newly added variant cases, 374 patients were infected with the more transmissible Delta variant, common in India, exceeding the number of new Alpha cases.

Patients infected with the Alpha variant, or the British variant, followed with 162 cases. There were no new Beta or Gamma variant patients.

The proportion of Delta cases in Seoul and its neighboring areas also more than doubled, from 12.7 percent to 26.5 percent over the past two weeks.

The Delta variant was found in 20 people in a cluster of infections tied to an elementary school in Michuhol District, Incheon, Gyeonggi, including students and their families.

The number of patients related to this cluster reached more than 70 as of Tuesday, adding fears that more Delta patients could be found.

“At the moment, we need be very vigilant about the speed of the Delta variant,” Sohn Yong-rae, a senior health official said Tuesday.

So far, there is no data on people who only got their first vaccine shot getting sick.

Among the breakthrough infections, 143 patients had received the Janssen vaccine, followed by 59 with Pfizer and 50 with AstraZeneca, health authorities said.

However, considering that around 4.17 million people are fully vaccinated in Korea, the breakthrough incidence remains very low at 0.00006 percent.

Some 12 of the breakthrough patients were infected with the major virus variants: Nine with the Alpha variant, followed by two with Delta and one with Beta.

“A breakthrough infection can happen with all types of vaccines,” said Lee Sang-won, head of epidemiological investigation analysis at the Central Disaster and Safety Countermeasure Headquarters, during a briefing on Tuesday.

Amid worries over the more contagious virus variants, Korea’s daily new coronavirus cases spiked above 1,000 for seven days, the longest stretch since the pandemic began in the country. 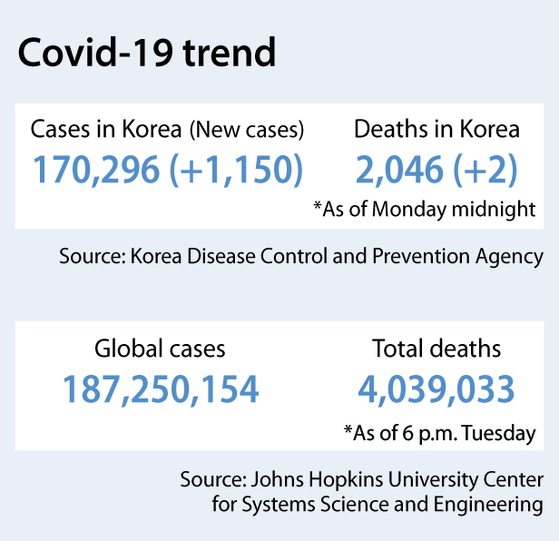 Virus cases outside of greater Seoul rose to 27.6 percent of the total, with 303 cases confirmed on Tuesday.

Most of the non-capital areas were put under Level 1, the most-relaxed in the four-tier distancing scheme, as new infections were relatively low compared to Seoul and its neighboring areas.

The government set a two-week pilot period from the first day of July to let local governments adjust measures depending on their virus situation.

In the past few days, however, cases started to grow outside of Seoul, Gyeonggi and Incheon.

With the pilot period ending Wednesday, the government will announce Wednesday morning new social distancing levels and individual quarantine measures to be applied in each region.

The Seoul metropolitan area has been put under the strictest Level 4 since Monday, through July 25.

To fight the fourth wave, Korea began administering Pfizer shots from Israel to workers in virus-vulnerable sectors with high rates of contact with other people, including transportation workers, street cleaners, delivery workers and hagwon teachers in Seoul and Gyeonggi, as well as to daycare center, kindergarten, and first- and second-grade school teachers nationwide.