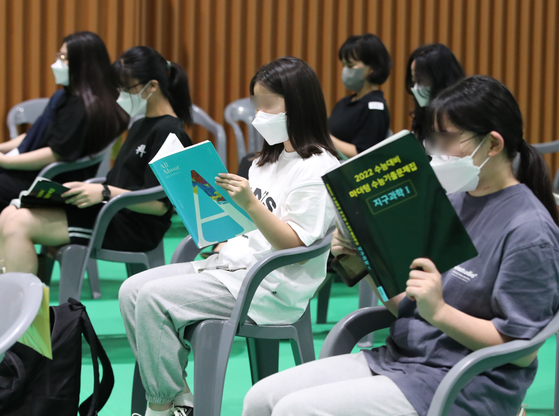 
Korea is getting less than half the Moderna vaccines it expected in August, causing delays for many people waiting for their second shots.

The Covid-19 Vaccination Task Force announced Monday the U.S. pharmaceutical company sent notice that it will supply less than half of the 8.5 million doses expected in August due to problems in labs related to vaccine production.

"Moderna apologized for the supply disruption saying the vaccine supply problem was global, and promised to do its best to deliver the promised amount to Korea,” the task force said.

Korea inked a deal with Moderna to procure 40 million doses, enough for 20 million people. After shipping 112,000 shots in the first half of the year, the company sent an additional 2,343,000 doses to Korea since July 1.

With an unexpected shortage of vaccines, the government temporarily extended the interval between two doses of mRNA-based vaccines — Moderna or Pfizer — from four to six weeks.

“People scheduled to get their second mRNA vaccine shot after Aug. 15 will have their interval extended to six weeks,” the task force said.

The vaccination intervals between Pfizer and Moderna shots were set as three weeks and four weeks, respectively, but the government’s committee on Covid-19 vaccination allowed intervals of up to six weeks, depending on the vaccine supply situation and conditions at medical facilities across the country.

As a result, people who got their first mRNA vaccine shot since July 26, including people in their 50s and essential personnel such as delivery workers and transportation drivers, will be affected by the adjustment.

"High school seniors and staff, and other college entrance exam takers will maintain the original interval to prevent any disruptions to the College Scholastic Ability Test [CSAT] schedule."

Teachers at daycare centers, kindergartens, elementary and middle schools will have intervals of five weeks instead of four in order to get them vaccinated ahead of the fall semester.

The administration first shots for people in their 50s, which is going on through Aug. 28, will continue as planned, the task force added.

On July 23, health authorities had already announced they would expand the interval between Pfizer doses from three to four weeks.

Health authorities claimed that was for inoculation efficiency, but the supply disruption was found to be the main cause. Due to a shortage of Moderna vaccines for people in their 50s, the country suddenly added Pfizer shots, and increased the interval between shots to the same as Moderna’s, or four weeks.

In terms of the vaccines’ effectiveness and safety, experts say the delay is not a problem.

"The prevention effect can be reduced if the interval is shortened, but it isn’t a big problem when it is expanded,” Bang Ji-hwan, head of the central infectious disease hospital operations center at the National Medical Center, said.

However, Jung Jae-hun, a professor of preventive medicine at the Gachon University College of Medicine, said, "A lot of data shows that one vaccine dose alone does not provide enough protection against the Delta variant.

“The [interval expansion] means that people would have to endure [one to] two more weeks with only one shot given, along with more possibility of getting infected.”

"Even if there is no problem in [protection], if authorities keep changing their plans due to supply problems, public distrust will increase about public health measures in general,” Professor Choi Jae-wook of the Department of Preventive Medicine at Korea University’s College of Medicine said.

The government said it will immediately lodge a complaint against Moderna over the delay in the vaccines, and send an official delegation led by Second Vice Health Minister Kang Do-tae to express strong regret over the delay.

This isn’t the first time Moderna's supply schedule was disrupted.

In the last week of July, the company postponed the delivery of a batch of 1.96 million vaccine doses from July to August due to an unidentified “production issue” with its European manufacturers.

In addition, a series of breakthrough infections — a fully vaccinated person catching the coronavirus — have been reported recently among elderly in Korean nursing homes, suggesting the country is in need of additional booster shots.

Senior citizens in nursing homes were the first to receive the jabs once the country began its vaccination program on Feb. 26.

However, 39 breakthrough infections were recently reported among seniors hospitalized in a nursing hospital in Gijang County in Busan as of Monday.

Of them, 37 patients were fully vaccinated with the AstraZeneca vaccine, while two others were given the Pfizer vaccine.

Most of them had completed their vaccination by mid-June, health authorities said.

Five workers at the hospital were found to have been infected after receiving full courses of the AstraZeneca vaccine.

Health authorities said that patients in nursing hospitals are older, thus have weaker ability to form antibodies against Covid-19, and sometimes couldn't wear masks due to their health conditions.

Another nursing home in Gimhae, South Gyeongsang, reported 14 new Covid-19 patients, of which most of the patients, who are in their 80s, had been fully vaccinated.

The city announced 12 of them had caught the Delta variant.

"We cannot control the supply and demand of vaccines as we have no choice but to rely on a small number of foreign Covid-19 vaccine manufacturers," Moon said during a meeting with senior secretaries at the Blue House on Monday, "but we will make the most of the amount procured to hasten the achievement of the vaccination goal.

"We will speed up the development of domestic vaccines and push ahead with our vaccine hub strategy so as not to be swayed by foreign companies,” Moon said.

Regarding the strictest social distancing measures imposed throughout the capital region, the President said they are “just an emergency means” that can be used temporarily in a short period and “can't be sustainable," adding the country should put all efforts into curbing the virus. 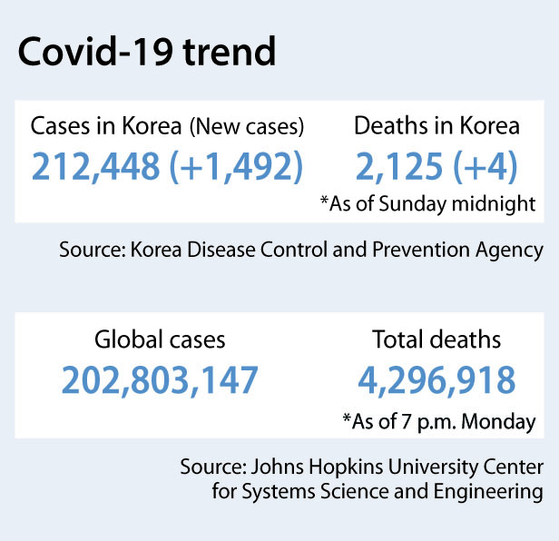 There were four additional virus deaths, bringing the death toll to 2,125.