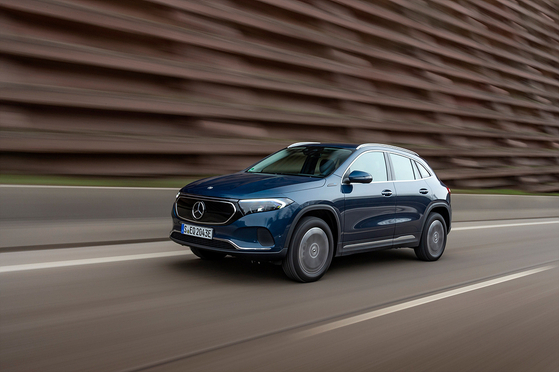 Korea says Mercedes-Benz's all-electric EQA SUV only goes 302 kilometers on a single charge - much less than what it supposedly gets in Europe.

The EQA, a compact all-electric SUV that launched in Korea in July, was tested by the Korean Ministry of Environment and was given a 302-kilometer driving range -- far short of the 426-kilometer range it claims in Europe.

In low temperatures, the car's driving range falls to 204 kilometers, according to the Ministry of Environment.

The ministry, which is in charge of approving the range of electric vehicles (EVs) sold in the country, is known to test EVs under more rigorous conditions than Europe's Worldwide Harmonized Light Vehicle Test Procedure (WLTP) standards.

“Range tests in Europe tend to focus more on urban driving, which includes more frequent acceleration and deceleration,” said Jeong Taek-ho, a researcher from the National Institute of Environment Research.

Tests in Korea are also done with heaters turned on to the maximum level all the way through, while WLTP tests in Europe aren’t, according to Jeong.

This is not the first time the official range certified by the ministry fell short of an automaker's expectations.

Porsche’s Taycan 4S, an all-electric model with a WLTP-based driving range of 463 kilometers, was given 289 kilometers in Korea.

Hyundai Motor’s Ioniq 5, which had a 483 kilometer range in Europe, was certified for 405 kilometers here.

“We feel sorry that the ministry's driving range was shorter than expected,” said a spokeswoman for Mercedes-Benz Korea on Thursday.

“The price, however, is still attractive and I believe consumers will still feel interested in the model.”

An EV subsidy offered by the central government on the EQA will shrink from 8 million won to 6.1 million won due to the shorter range. The subsidy is based on electricity efficiency and driving range.