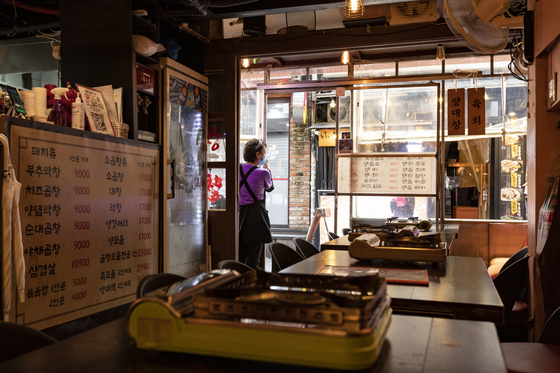 A server waits for customers at a restaurant around Hongdae Station after private gatherings of more than two people are banned from Monday. [JEONG JUN-HEE]


JANG JOO-YOUNG
The author is a national team reporter of the JoongAng Ilbo.

A night-time curfew existed during the Joseon Dynasty (1392-1910). The curfew started with a bell being rung 28 times and ended with 33 rings. During the reign of King Taejong, curfew was enforced from 8 p.m. to 4:30 a.m. After King Sejo’s reign, it was relaxed from 9 a.m. to 3 a.m. According to the Annals of King Taejong, Daesaheon Lee Won was removed from his post for violating the curfew. Daesaheon was a high-level position equivalent to prosecutor general today.

In September 1945, one month after liberation, the U.S. military government implemented a curfew to maintain public security. The curfew lasted for 36 years until it was abolished before the selection of the Olympic host city on January 5, 1982. At the time, you could hear a radio broadcast at 10 p.m. encouraging young people to return home. At 11 p.m., bus stops were crowded with people heading home. At midnight, sirens and guards’ whistles were blown. The trace of the curfew still remains in that taxis charge extra fees between midnight and 4 a.m.

I thought the curfew had disappeared in history, but it has returned during the Covid-19 pandemic. With the fourth wave of the coronavirus, the toughest Level 4 distancing rules were enforced from July 12. After 6 p.m., dinners are restricted to parties of two. It is not a message for two people to get together. It means people should go home early. So the Level 4 distancing is practically considered a curfew.

Who is responsible for the disappearance of free nightlife? Some criticize the government for short vaccine supplies and eased distancing measures. Blue House officer for disease control Ki Mo-ran — and Seoul Mayor Oh Se-hoon, who emphasized relaxed disease control as soon as he took the office in April — are considered responsible. The only person who lowered their head was Jeong Eun-kyeong, head of the Korea Center for Disease Control and Prevention. Appearing to the National Assembly on July 13, she promised to communicate carefully as the message of easing distancing guidelines helped trigger the fourth wave.

Mistakes and wrongdoings need to be carefully investigated. But in the next two weeks, we must unite for disease control. The government must not neglect people who follow the curfew or small business owners.