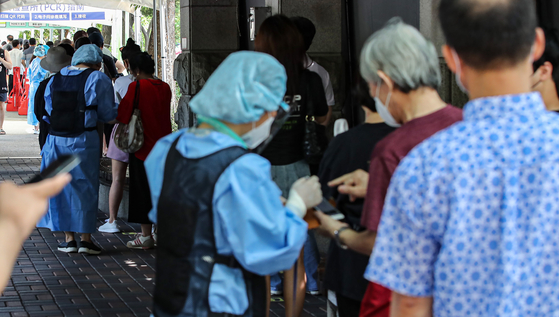 People wait for the Covid-19 test at the Gangdong District Public Health Office in eastern Seoul on Friday. [YONHAP]


The government will keep the current social distancing measures in place for the Covid-19 pandemic, including the toughest restrictions imposed in the capital region, until Aug. 22.

“The people’s patience and cooperation allowed us to contain the immediate fire, but the flames are still alive to spread infections,” Prime Minister Kim Boo-kyum said Friday at a meeting of the Central Disaster and Safety Countermeasures Headquarters.

Kim mentioned the country will celebrate Liberation Day next week on Aug. 15, and the infections may spread again. "We need to work together so that our children can safely return to school for the second semester," he said.

Currently, Level 4 social distancing measures — the toughest in the four-tier system — are implemented in Seoul, Incheon and Gyeonggi. One of the key restrictions in the Level 4 measures is a ban of private gatherings of more than four people before 6 p.m., and more than two people after 6 p.m.

Nightclubs and hostess bars will be shut down, and noraebang (singing rooms), PC bang (internet cafes) and movie theaters will be closed after 10 p.m. Restaurants and cafes are allowed to operate after 10 p.m., but only for pickup and delivery.

Rallies, other than one-person protests, will be banned, and religious events of up to 99 people will be allowed. 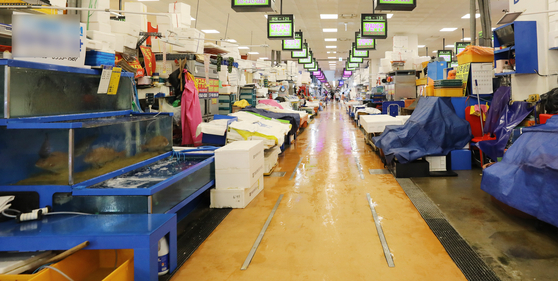 Noryangjin Fish Market in Dongjak District of southern Seoul is seen nearly empty on Friday as the fourth wave of Covid-19 infections shows no sign of slowing down. The government extended the Level 4 social distancing measures in Seoul, Incheon and Gyeonggi until Aug. 22. The fish market was hit by a cluster of infections, and 11 related people have been confirmed as patients so far. [NEWS1]

The current measures were originally only effective until Sunday, but the government announced Friday that the measures will be extended for another two weeks until Aug. 22.

Korea reported 1,704 new cases on Thursday, 1,640 of which were local infections.

The number of critical Covid-19 patients also went up from 155 on July 7 to 369 on Thursday. Critical patients are those currently undergoing oxygen treatment or requiring an artificial ventilator, extracorporeal membrane oxygenation or continuous renal replacement therapy.

The fatality rate remains at 1.03 percent.

What are the standards here?