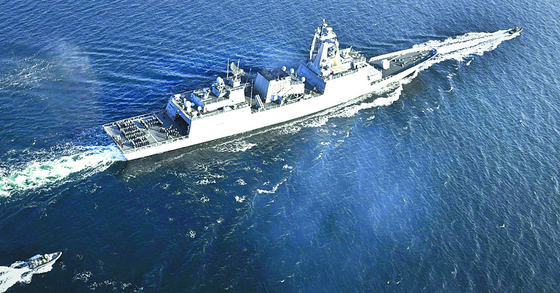 The Navy's Munmu the Great destroyer departs Korea for the Gulf of Aden in February. [YONHAP]


A Covid-19 outbreak reported aboard a Navy destroyer in the Gulf of Aden has spread to 68 crewmembers, prompting an unprecedented early return of the ship and an airlift of its entire crew back to Korea, according to military officials on Sunday.

The Joint Chiefs of Staff (JCS) said Sunday that the number of crewmembers who tested positive for Covid-19 aboard the Munmu the Great Destroyer has risen from seven on Thursday to 68 as of Sunday.

Local health authorities conducted polymerase chain reaction (PCR) tests on 101 crewmembers, leaving open the possibility that the number of infected troops may yet rise. Some 200 crewmembers aboard the ship remain untested.

The ship left Korea in February, long before the country's mass vaccination program for military personnel began. It has been stationed in the Gulf of Aden in eastern Africa as part of the Navy Cheonghae unit's peacekeeping and anti-piracy mission since March.

According to the Joint Chiefs of Staff, the number of Navy servicemen who have been admitted to a local hospital for medical treatment due to pneumonia symptoms has risen to 15, up from 12 on Saturday.

As a result of the Munmu the Great's early return to Korea, the Chungmugong Yi Sun-sin destroyer will relieve the Munmu and its crew of their duties, according to various military sources.

Earlier on Friday, the Defense Ministry and JCS said that two KC-330 Cygnus multipurpose tanker airplanes would be sent to the Gulf of Aden to airlift crewmembers from the Munmu the Great. 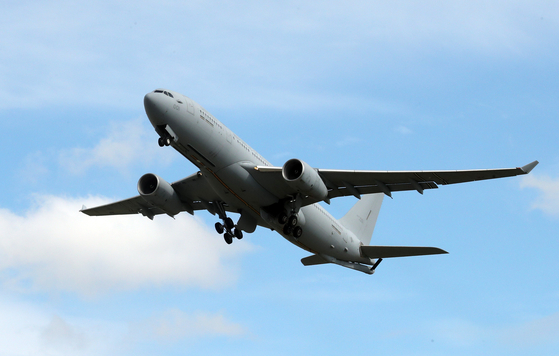 One of two KC-330 Cygnus multipurpose tanker airplanes which will airlift the Munmu the Great's crew back to Korea departs Kimhae Airport near Busan on Sunday afternoon. [YONHAP]

All 300 members of the 34th contingent of the Cheonghae unit aboard the Munmu the Great will return home on the planes, which departed from Kimhae Airport near Busan on Sunday afternoon. The contingent was originally scheduled to hand over its peacekeeping and anti-piracy mission to the 35th contingent aboard the Chungmugong next month.

Members of the 34th contingent to be airlifted back to Korea will be divided between the planes based on their Covid-19 test results. They will be subject to further tests and isolation upon their return to Korea.

The planes will also carry medical equipment to provide treatment for infected crewmembers during their journey back to Korea, which takes up to 20 hours from eastern Africa.

The 34th contingent will be the first team to abort its mission since the Cheonghae unit was established in 2009. Korea's troops are rotated every six months.

The 4,400-ton Chungmugong belongs to the same class of destroyer as the Munmu the Great and recently arrived in the Gulf of Aden after departing Busan on June 22.

"Forty members of the Chungmugong's crew have previous experience participating in the Cheonghae unit's mission. As such, they are prepared to take over from the Munmu the Great," said one military source.

The military will also send a team aboard the Cygnus tanker planes to sterilize the Munmu the Great, and sail it back to Korea. "A captain-level commander and the minimum number of sailors required to operate the ship will be sent to bring it back," the official said.

Experts inside and outside the military have said the outbreak among the unvaccinated crew of the destroyer was predictable, given that troops must go ashore to get food and other vital supplies aboard the ship throughout the mission.

"While the health authorities have yet to determine the exact route of infection, we cannot exclude the possibility that the virus was transmitted during the [ship's] resupplying process," said one military source.

"If the local Covid-19 situation is not good, I think we should have asked for help in securing supplies from other armed forces in the region, such as the United States, who have strict anti-virus measures in place, even if that means avoiding local people."

Although the Defense Ministry said it did not send vaccines to the Munmu the Great's crew because of vaccine transport requirements and the difficulty of arranging treatment for those who showed adverse side effects to inoculation, that explanation faced criticism as well.

"If they had vaccinated just the officers who come into regular contact with locals, the situation would not have become so dire," said one military official who spoke on the condition of anonymity. "Also, all of the [Munmu's] officers are eligible for the AstraZeneca vaccine, which doesn't require ultra-cold storage conditions like the Pfizer vaccine."

Hyunmoo missile crashes in South Korean base during joint drills