Defense Minister Suh Wook, center, bows in apology for the Covid-19 outbreak aboard the Munmu the Great destroyer at a press briefing at the Defense Ministry in Yongsan District, central Seoul on Tuesday. [NEWS1]


Following a Covid-19 outbreak on a Navy destroyer stationed in eastern Africa that infected an overwhelming majority of the crew, Defense Minister Suh Wook apologized for the military's failure to protect service members overseas.

“I feel a heavy responsibility as defense minister for the large number of confirmed cases because I failed to take care of the 34th contingent of the Cheonghae unit,” Suh said during a press briefing at the Defense Ministry in Yongsan District, Seoul, on Tuesday morning.

247 out of the 301 members, or 82 percent, of the 34th contingent of the Navy’s Cheonghae unit, which has been stationed in the Gulf of Aden aboard the Mumu the Great destroyer since March as part of the unit’s peacekeeping and anti-piracy mission, had tested positive for Covid-19 as of Monday.

The outbreak on the Munmu, the first signs of which began with a naval officer’s admission to a local hospital with pneumonia symptoms on Thursday, prompted the Defense Ministry and Joint Chiefs of Staff to organize an airlift of the ship’s crew back to Korea and an unprecedented canceling of the 34th contingent’s mission.

All of the Munmu’s crew arrived in Korea on Tuesday afternoon on two KC-330 Cygnus multipurpose tanker airplanes dispatched by the Defense Ministry and the Joint Chiefs of Staff. 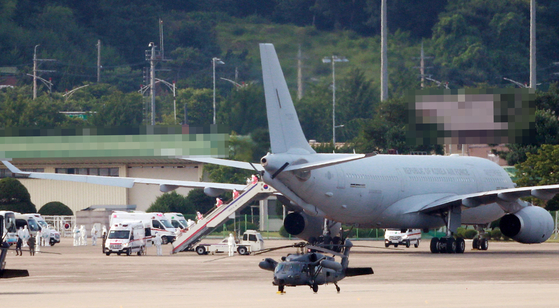 Navy crewmembers from the Munmu the Great destroyer disembark on Tuesday afternoon from one of two KC-330 Cygnus multipurpose tanker airplanes which airlifted them back to Korea. [YONHAP]

“I deeply apologize to the soldiers, family members and the people of the Cheonghae unit,” Suh said. “We have been actively pushing for vaccination of all soldiers, including troops who are dispatched overseas, but there was a lack of effort to vaccinate troops in the Cheonghae unit who departed in February,” he said.

The apology issued by Suh is his sixth since assuming the post of defense minister in September.

The military has been engulfed by a series of crises under Suh, which includes the killing of a South Korean fisheries official in the Yellow Sea by a North Korean maritime patrol, complaints of substandard food being served to active-duty soldiers, security breaches along the eastern maritime border by North Korean defectors, and sexual harassment incidents in the armed forces.

Although the defense minister admitted responsibility for not sufficiently protecting Cheonghae unit crewmembers from exposure to Covid-19, neither his explanation nor the one given by Jeong Eun-kyeong, commissioner of the Korea Disease Control and Prevention Agency (KDCA), as to why the crew were not inoculated against Covid-19 managed to placate critics.

Jeong said in a press briefing Monday that vaccine distribution to overseas soldiers was deemed too difficult to execute because of storage and transport requirements, while Suh said during Tuesday’s press briefing that vaccination was not possible for Navy service members in the Cheonghae unit because they are part of an international peacekeeping mission.

However, one government official who spoke on the condition of anonymity said, “The United States military, which leads several multinational missions and exercises, included the Korean Attachment to the U.S. Army (KATUSA) and Korean civilian personnel as part of its military vaccination program.”

He added, “If the government had requested vaccines from the U.S. military for the 34th contingent of the Cheonghae unit before they set sail in February, they could have secured enough vaccines for 300 people.”

Shortly before the defense minister issued an apology, President Moon Jae-in said at a Cabinet meeting at the Blue House on Tuesday that “although our military did what it could to respond to the situation, it is hard to avoid people’s judgement that it fell short.”

While Moon urged the military to “spare no energy in its anti-virus efforts,” he did not issue an official apology for the government’s handling of the outbreak aboard the Munmu the Great destroyer or the failure to vaccinate the crew.

Opposition People Power Party (PPP) lawmaker Ha Tae-keung, who sits on the National Assembly’s defense committee, held a press briefing on Tuesday at the legislature where he quoted a father of one of the Munmu’s crewmembers who asked Ha on Monday to chastise the government.

“He told me that he was outraged that his son was endangered due to the government’s lack of preparation, and not as the result of being injured in battle,” Ha said. “What parent would send their son into a military such as this?”

Ha also mentioned the father's allegations that the military attempted to cover up the possibility of a Covid-19 outbreak aboard the ship in its early stages.

“According to his son, someone in the unit came down with the flu on July 2. His son reported [to higher-ups] that this person probably had Covid-19 because he lost his sense of taste and smell. However, his son’s superiors ignored his report and that of others.

“Even as their body temperature rose to 39 to 40 degrees Celsius, they were told to get through it with two pills of Tylenol.”