Korean in Vietnam dies, is cremated, with nobody informed

Korean in Vietnam dies, is cremated, with nobody informed 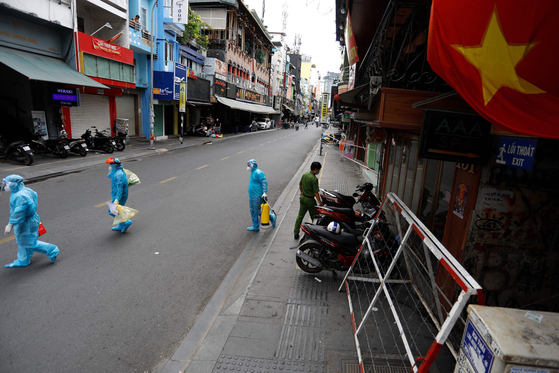 Medical workers collecting test samples from residents in Ho Chi Minh City on July 9, the first day of a two-week lockdown to prevent the spread of Covid-19. [HUU KHOA/AFP/YONHAP]

The fate of a Korean Covid-19 fatality in Vietnam, who was cremated without his relatives or the Korean government being notified, is spooking other Koreans in the Indochinese nation, which is suffering a wave of infections.

A 58-year-old Korean man was infected with Covid-19 in Ho Chi Minh City earlier this month. He was put in a quarantine facility, then moved to a hospital after his condition deteriorated.

The problem was that no health official informed the Korean consulate before the cremation. Normally Vietnam would inform a foreign diplomatic mission about the death and cremation of one of its nationals.

In this particular case, the Korean man's move from quarantine facility to hospital, and his death and cremation were not shared with the Korean consulate.

“It is the usual practice of Korean diplomatic missions abroad to keep a list of Korean citizens infected with Covid-19, and to check with local authorities on their condition,” a Foreign Ministry official told the JoongAng Ilbo. “In this man’s case, the fact that his conditions worsened and he was hospitalized was not shared with the Korean consulate in Vietnam.”

Only three days after the man’s death did Korea’s Foreign Ministry finally found out that he had been cremated. The first alert came from a friend of the man, who was also infected with Covid-19 and kept in a quarantine facility. The friend notified other members of the Korean community in Vietnam and the consulate general that he could not get in touch with the man, prompting a search.

Korea’s Foreign Ministry said it submitted a statement to the Vietnamese Foreign Ministry and Health Ministry requesting that they “share immediately details concerning Korean citizens infected with Covid-19 with their relatives and the Korean Embassy.”

The man who died was reported to have lived alone in Ho Chi Minh. All of his relatives are in Korea.

The ministry has confirmed with the Vietnamese government the whereabouts of the man’s ashes, and intends to coordinate their repatriation to Korea within the week, the JoongAng Ilbo reported Monday.

The incident came a month after Korea and Vietnam’s foreign ministers held a meeting to pledge closer cooperation on fighting the pandemic.

In the meeting, Seoul pledged to support Hanoi with medical devices including syringes worth around $2.5 million.

“Mentioning how the Korean government was implementing Covid-19 vaccinations for both nationals and long-term foreign residents in Korea, Minister Chung asked for active support from Vietnam to assist Korean residents in Vietnam to get vaccinations,” Korea’s Foreign Ministry said in its statement last month.

Vietnam’s daily infection count has been around 2,200 recently, the highest since the onset of the pandemic, according to Reuters. Only around 4 percent of the country’s population has received first doses of vaccines, according to Our World in Data, a research team based at the University of Oxford.

“Vietnam is going through the highest peak yet since the onset of the pandemic,” Park Jung-ryul, a 49-year-old Korean man living in Vietnam, told the JoongAng Ilbo. “We hear of shortages of vaccines and hospital beds every day. And now the news of a Korean who was cremated without any notification to relatives is scaring all of us to death."

Ho Chi Minh City was put in a two-week lockdown starting July 9 to curb the spread of the virus.

Racing without the fans