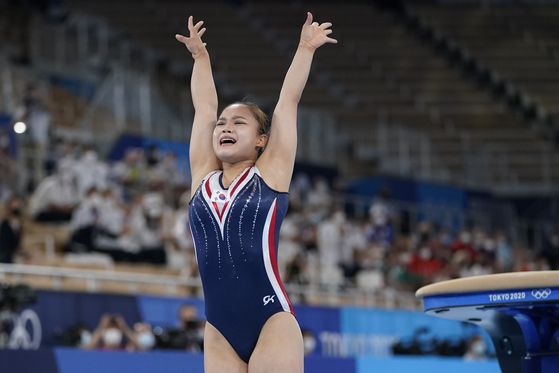 Korea's Yeo Seo-jeong performs on the vault during the artistic gymnastics women's apparatus final at the 2020 Summer Olympics on Sunday in Tokyo, Japan. [AP/YONHAP]


Korea's Yeo Seo-jeong won bronze in the women's vault on Sunday, becoming the first Korean woman ever to medal in gymnastics at the Olympics.

Yeo finished in third place with a combined score of 14.733, trailing slightly behind Mykayla Skinner of the United States in second place and Rebeca Andrade of Brazil in first.

Yeo actually pulled off the most technically difficult and highest scoring move of the day, scoring 6.200 for difficulty on her first vault with a 9.133 for execution, combining for a huge 15.333 total. On that move alone, Yeo would have taken gold. Her landing on her second vault was slightly off, lowering her execution score slightly to drop her down to a total score for the vault of 14.133. 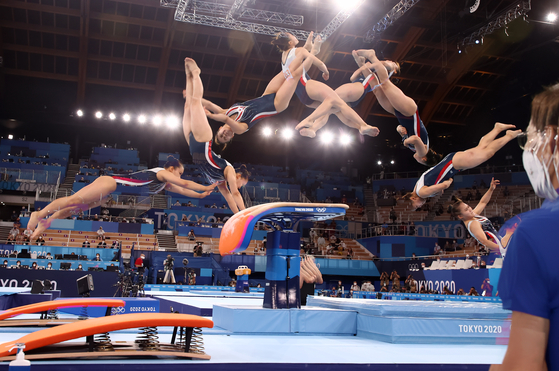 Korea's Yeo Seo-jeong performs in the women's vault event at the 2020 Tokyo Olympics on Sunday. [YONHAP]


The average of the two gave her the 14.733 final score, enough for bronze, but not reflective of the complexity of her first vault.

Yeo's first vault wasn't just the highest scoring at the Games, it was, officially, her own. Yeo performed the “Yeo Seo-jeong,” which is a mix of her father Yeo Hong-chul’s skills “Yeo1” and “Yeo2.” With a difficulty score of 6.2, the new vault includes a forward handspring and a salto forward with a 720-degree twist at the end.

Yeo initially performed it during the Korea Cup in Jeju in June, 2019. It has since been recognized by the International Gymnastics Federation (FIG) and was listed on the FIG Code of Points.

Yeo is a rising star, and also a familiar name in Korean gymnastics because she is the daughter of Yeo Hong-chul, who won silver in the men’s vault at the 1996 Summer Olympics in Atlanta. Her mother Kim Yoon-ji is also a gymnast, winning the team bronze medal in artistic gymnastics at the 1994 Asian Games.

Korea has never been a major competitor in artistic gymnastics, but it has repeatedly picked up one or two medals at most Games. Korea failed to medal at the 2016 Rio Olympics, but won gold in men's vault at the 2012 London Olympics, silver in men's parallel bars at the 2008 Beijing Olympics, and multiple medals at the 2004 and 2000 Games.

Yeo isn't the only Korean gymnast looking strong in Tokyo. Just minutes before she competed, Korea's Ryu Sung-hyun narrowly missed out on a medal in the men's floor gymnastics event, finishing fourth.