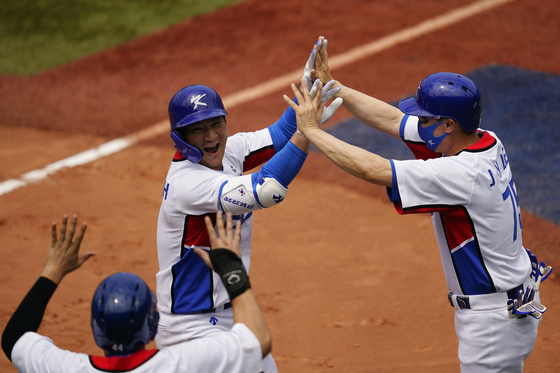 Korea's Oh Ji-hwan, center, celebrates with his teammates after hitting a two-run home run during a baseball game against Israel at Yokohama Baseball Stadium during the 2020 Tokyo Olympics on Monday. [AP/YONHAP]


The Korean national baseball team will take on old rival Japan in the semifinals on Wednesday, hoping to become the first team to beat the host country in the Olympic tournament.


Japan beat the United States 7-6 in extra innings on Monday evening to earn a spot in the semifinals. Korea cruised past Israel earlier in the day to earn its place.

Japan enters the semifinals as the only undefeated team, having beaten the Dominican Republic 4-3 in the opening game of the Olympic tournament and Mexico 7-4 to round off the group stage.

Finishing first place in Group A, Japan advanced straight to the second round of the knockout stage where it faced the United States.

Korea had a slightly rougher path to the semifinals.

It first faced Israel in the group stage, a humiliating matchup on July 29 that saw the defending champions very nearly lose their opening game. Korea did scrape out a win, but it was more thanks to Israel's mistakes than anything intentional. Korea went on to lose a game to the United States, but advanced to the first round of the knockout stage.

On Sunday Korea pulled off a last-gasp ninth-inning win against the Dominican Republic after struggling for most of the game, advancing to the second round of the knockout stage on Monday, where the team faced Israel again.

The Korean side that had fumbled its way through those three games was nowhere to be seen on Monday. Instead, Korea was consistently strong on offense, spreading out the first few runs before exploding in the fifth to take an insurmountable lead. Pitching also looked tighter, with only one hiccup causing any real damage. Korea walked away with a big 11-1 win in seven innings, with the game cut short due to the size of the lead.

Korea and Japan have a lot of history. Korea beat Japan in the semifinals at the 2008 Olympics, advancing to the finals and winning gold. Japan ended up empty-handed after losing the bronze medal match to the United States.

At the 2018 Asian Games, Korea beat Japan in the final to win gold. Korea also took gold at the 2014 and 2010 Asiads — both times, Japan had to settle for bronze. At the 2009 World Baseball Classic, Japan beat Korea in the final.

The team that wins on Wednesday will advance straight to the final, but it isn't over for the loser. The loser will move straight to the other semifinal, where they will face the winner of a repechage game between the United States and either Israel or the Dominican Republic.