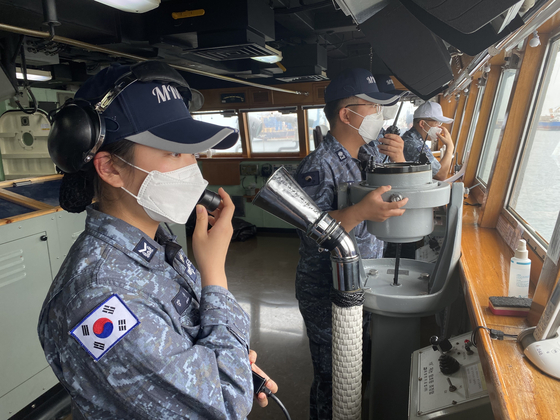 A special operations team dispatched to the Munmu the Great destroyer in the Gulf of Aden conduct pre-departure exercises and checks of the ship before sailing it back to Korea on Wednesday. [YONHAP]


Twenty-three additional crewmembers from the 34th contingent of the Navy's Cheonghae unit tested positive for Covid-19 upon their return to Korea from the Gulf of Aden on Tuesday as the military faces severe criticism for failing to take measures to prevent the mass outbreak on the Munmu the Great destroyer.

The ship, which has been stationed in waters off East Africa since March to conduct peacekeeping and anti-piracy operations, was the site of a Covid-19 outbreak which has now infected 270 out of 301 of the crew as of Wednesday.

Two hundred forty-seven crewmembers had tested positive for Covid-19 before their departure from eastern Africa on Monday, local time.

The outbreak on the Munmu, the first signs of which began with a naval officer’s admission to a local hospital with pneumonia symptoms on July 14, prompted the Defense Ministry and Joint Chiefs of Staff (JCS) to organize an airlift of the ship’s crew back to Korea and an unprecedented canceling of the 34th contingent’s mission.

All 301 members of the 34th contingent of the Cheonghae unit aboard the Munmu the Great arrived home late Tuesday afternoon on two KC-330 Cygnus multipurpose tanker airplanes dispatched by the Defense Ministry and the JCS.

With the airlift of the Munmu the Great’s original crew, the destroyer is now being sanitized by a replacement crew and sailing back to Korea. The ship is expected to arrive in Korea in early September after a voyage of about 50 days.

The unprecedentedly high number of infected crewmembers aboard the Munmu prompted heavy criticism of alleged missteps by the Cheonghae unit, the JCS and the Defense Ministry which left the crew vulnerable to viral infection.

Although the Defense Ministry explained that members of the 34th contingent were not vaccinated because the Munmu departed Korea on Feb. 8, almost a month before the military began vaccinating its personnel, the military’s own vaccination plan prioritized medical corps units and essential operations units — effectively de-prioritizing the Cheonghae unit, according to opposition People Power Party (PPP) lawmaker Lee Chae-ik.

According to Lee, the Defense Ministry held a series of meetings with the Korea Disease Control and Prevention Agency (KDCA) in February and March to discuss the possibility of vaccinating units posted overseas. Although KDCA Commissioner Jeong Eun-kyeong said Monday that vaccine distribution to overseas troops was deemed too difficult to execute because of storage and transport requirements, Lee said that the KDCA told the Defense Ministry that domestic recipients of vaccines were to be prioritized.

“If [the Defense Ministry] had known that vaccine administration would be difficult for overseas units, they should have delayed deployment until those units could be vaccinated,” Lee said.

While military authorities secured vaccines for other overseas units, such as the Akh unit posted in the United Arab Emirates and the Hanbit unit posted in South Sudan, through cooperation with the United Nations, the Defense Ministry claimed that the Cheonghae unit could not benefit from similar help because it was part of a multinational peacekeeping mission.

However, one military official who spoke on the condition of anonymity said, “The United States military, which leads several multinational missions and exercises, included the Korean Attachment to the U.S. Army and Korean civilian personnel as part of its military vaccination program."

He added, “The United States led the creation of the Combined Maritime Forces which directs the Cheonghae unit. If we had actively sought assistance from the United States regarding vaccines, we could have received help [vaccinating the Munmu's crew].”

The military command was also late to report the situation aboard the Munmu the Great to the Defense Ministry.

While the first reported case of a crewmember with cold-like symptoms aboard the Munmu the Great was reported on July 2, increasing to 18 cases on July 5 and 78 on July 9, the Cheonghae unit only reported the increase among the crew to the JCS on July 10, by which time 95 crewmembers reported having a cold.

However, the JCS still did not report the outbreak to the Defense Ministry until July 14, when an officer was taken to hospital for suspected pneumonia.