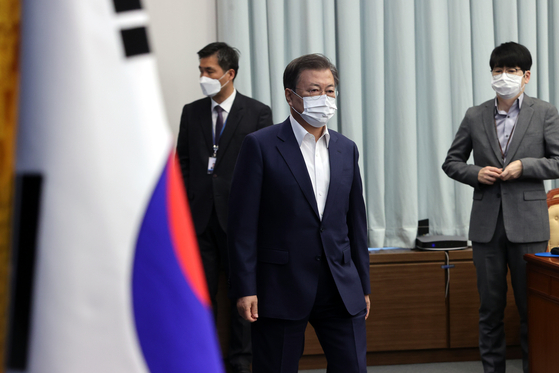 President Moon Jae-in attends a cabinet meeting at the Blue House where a 19.5 trillion won stimulus package was approved on Tuesday. [YONHAP]


The government unveiled a 19.5 trillion won stimulus package that gives grants of up to 5 million won to small businesses hurt by the pandemic. Most of the package will be paid through a 15 trillion won supplementary budget.

The supplementary budget is this year’s first but the fifth since the coronavirus outbreak started in 2020. It is the second-largest of the five.

The biggest was a 35.1 trillion won supplementary budget passed by the National Assembly in July.

The stimulus package has three main parts: support for small businesses hurt by the pandemic, to prop up or create jobs, and spending on quarantine measures including vaccine purchases and compensating medical institutions whose businesses were affected by Covid-19.

The grants to small businesses are bigger than previous grants and are easier to qualify for.


The 11 businesses that were shut down for public health reasons will be eligible for the maximum amount, including gyms, noraebang and bars.

The ceiling on the emergency relief grants distributed since January was 3 million won.

The government has also relaxed some rules.

Previously, only businesses with annual revenues less than 400 million won were eligible. That has been raised to 1 billion won. Businesses with more than five employees are now eligible.

With the relaxing of the rules, the number of people receiving the grants has been raised 38 percent from the 2.8 million in January to 3.85 million.

One-time allowances will again be offered to people with unsteady jobs such as freelancers.
Some 700,000 people that received earlier allowances of 500,000 won will be given 500,000 won more. Some 100,000 new applicants will receive 1 million won each.

Some 60,000 dolbom workers will receive 500,000 won. People who take care of the elderly, the disabled and young children at home are known as dolbom workers, which roughly translates as caregivers.

For the first time, the government will hand out 500,000 won each to street vendors. To be eligible, they have to be among the 40,000 that have officially registered their businesses with local governments.

Allowances of 2.5 million won will be given to college students whose parents either lost jobs or went out of business.

The stimulus package includes 2.8 trillion won from the supplementary budget to subsidizing small and medium-sized companies' wages to employees.

Some 4.1 trillion won will be used for quarantine measures including 2.7 trillion won for purchasing and administrating vaccines.

President Moon Jae-in stressed that his government was trying to help people who were previously left out.

Moon added that with the current rate of vaccine administration, the government is aiming for herd immunity by November.

“Our country has established a vaccination infrastructure like no other country and, as is evident from the speed and the rate of vaccination with influenza shots, we are a country to be envied.” 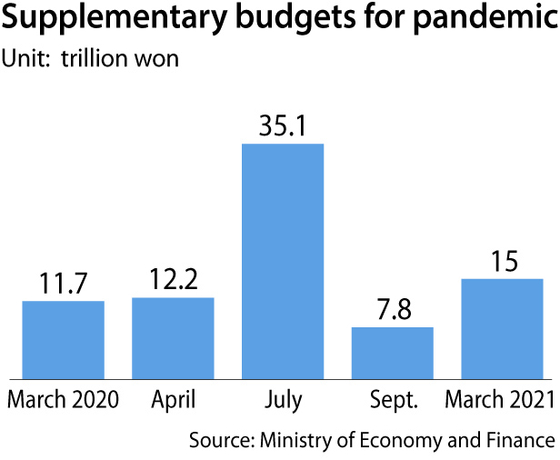 
Out of the total, 9.9 trillion won will be funded by government bonds. The rest will be covered by either repurposing existing funds or through Bank of Korea earnings.

The 15 trillion won supplementary budget represents a 2.7 increase in spending over the regular budget of 558 trillion won for this year.

The government's budget deficit is expected to be 89.6 billion won, 14.2 trillion won or 20 percent more compared to its initial estimate of 75.4 trillion won.

With new government bonds being issued for the supplementary budget, the national debt for this year is expected to grow to 965.9 trillion won, 119 trillion won or 14 percent more than at the end of 2020.

The national debt-to-GDP ratio will be raised from 47.3 percent under the initial 2021 budget to 48.2 percent.

Finance Minister Hong acknowledged concerns about the rapid expansion of the national debt.

“Our debt-to-GDP ratio for this year is expected to be raised to 48.2 percent,” Hong said Tuesday during a press briefing at the government complex in Seoul. “When compared to the OECD average, it is low. However, we cannot feel comfortable with the rapid speed at which the debt is growing.”

Hong stressed that it took seven to nine years for the national debt ratio to rise 10 percentage points previously. But with the aggressive spending for the Covid-19 crisis, a 10 percentage point hike could come as fast as two years.

The national debt ratio in 2016, the year before the Moon Jae-in government took over, was 36 percent.

“We are not a key currency country and so international credit management is important,” Hong said. “We can't forget that fiscal spending could increase at a rapid rate due to our low birth rate and aging population, as well as in the case of unification [with North Korea].”

The main opposition People Power Party has accused the DP and the Blue House of trying to buy votes in the upcoming mayoral by-elections in Seoul and Busan in April through the stimulus package.

The two mayoral seats became vacant after both mayors were accused of sexual assaults.