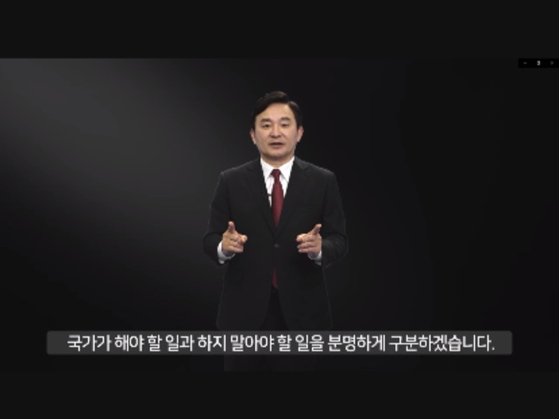 
Jeju Gov. Won Hee-ryong declared his presidential bid as an opposition candidate for next year's election Sunday, vowing to upend everything done during the Moon Jae-in administration.

Won, 57, of the main opposition People Power Party (PPP) announced he will run in the March 9 presidential election through his YouTube channel, saying he hopes to "create a Republic of Korea of a different class and a different dimension."

He shared his vision of a "country that values every person's happiness, where the next generation prospers even more and where the people, nature and civilization co-exist."

Won said, "I will undo everything done under the Moon Jae-in administration. I will firmly build the process that has been destroyed. I will vigorously open the road for innovation that has been blocked."

A Jeju native, Won graduated from Seoul National University's College of Law and received media attention for ranking first in the Korean bar exam in 1992.

After serving as a prosecutor and three-term conservative lawmaker, Won became governor of the Jeju Special Self-Governing Province in 2014. Won left the Saenuri Party, a predecessor of the PPP, in 2017. He was elected to his second consecutive term as governor in 2018 as an independent candidate and rejoined the PPP last year.

Won appealed through a virtual press conference from a cafe in Seoul streamed on YouTube Sunday, taking into consideration Covid-19 concerns, that he is relatively young with considerable political experience, stressing that he has for the past two decades worked for "conservative innovation."

He likewise said he will "clearly distinguish between what the state should do and what it should not do."

Won said he will "undo all the failed policies that ruined Korea, such as those related to economy and jobs, housing prices and energy," pointing to a destruction of the rule of law and controversial policies such as income-led growth, a nuclear phase-out and a 52-hour workweek.

He continued, "I will sow opportunities through national chance, not blood tax," adding he will strive to create statewide opportunities in child care, education, unemployment, poverty, entrepreneurship and youth.

He also said that "a proper judgment should be acceptable to everyone," and that one done by someone related to the Park Geun-hye or Moon Jae-in administrations "will be considered as retaliation," in an attempt to distinguish himself from other candidates.

Won stressed that he has "nothing to do with retaliation between two administrations," and also noted that the president shouldn't be a candidate who failed in the last election.

He said that he is not corrupt, does not have vested interests and is confident that he is the "right person for an administration change."

As president, Won pledged he will propose an emergency recovery plan and secure a 100 trillion won ($86 billion) budget which will include support for small business owners and self-employed individuals who have been hurt by the Covid-19 pandemic.

A slew of opposition candidates have declared their presidential bids, or are hinting at it, including recently Choe Jae-hyeong, a former chairman of the Board of Audit and Inspection who joined the PPP earlier this month. Former Prosecutor General Yoon Seok-youl has been leading in the polls as a conservative presidential contender.

When asked about when he may step down as governor, Won replied that he will ensure that the Jeju provincial government will not face any "setbacks," hinting that a resignation was imminent.

The PPP's election preparatory committee decided last week to come up with a shortlist of eight candidates by Sept. 15.