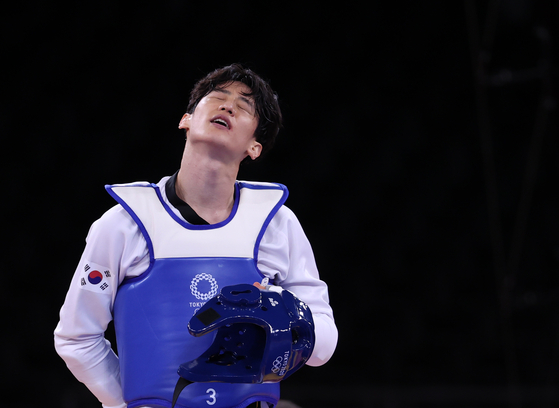 
Taekwondo practitioner Lee Dae-hoon crashed out of the men's 68 kilogram competition in the round of 16 on Sunday, the latest Korean sporting giant to fall without a shot at a medal.

Lee, a silver medalist at the 2012 London Games and bronze medalist at the 2016 Rio Games, lost to Ulugbek Rashitov of Uzbekistan in the round of 16 fight at Makuhari Messe Hall in Chiba, Japan. With Rashitov winning 21-19 after four rounds, the bout was decided on golden points.

Lee's early departure comes as a shock to Team Korea, who had been relying on the world No. 1 to bring home a Taekwondo medal. So far, Korea's only silverware in its native sport was a bronze medal won yesterday by Jang Jun, also a world No. 1 who had been expected to reach the final.

If Rashitov advances to the final of the tournament, Lee could still have a chance at reaching the bronze medal match through a consolation fight. For Lee, who plans to retire after the 2020 Tokyo Games, that slim chance is his last shot at an Olympic medal.

Despite it only being Day 2 of the tournament, Lee isn't the only Korean giant to have already underperformed in Tokyo. Yesterday, veteran shooter  Jin Jong-oh failed to make it past the qualifying round in the men's 10-meter air pistol, crashing out of the tournament early in the first big blow to Korean fans. Jin will still have a chance to redeem himself in the team event.