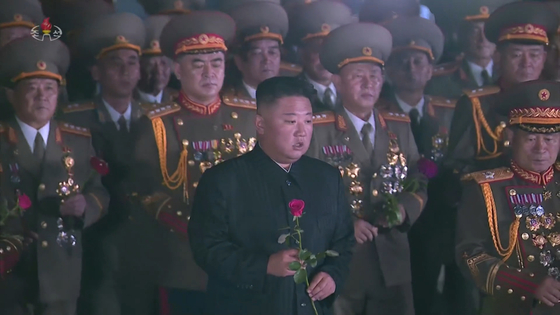 North Korean leader Kim Jong-un lays a flower during a ceremony to commemorate the anniversary of the Korean War armistice in Pyongyang on Tuesday. The photo is a screen capture of North Korean state media KCTV. [YONHAP]


By restoring the direct hotline between the two Koreas, Pyongyang may be considering re-engaging with the United States in dialogue, some Korean experts noted.

“The North knows that the Biden administration, unlike the Trump administration, places a strong emphasis on the U.S.-South Korea alliance,” said Kim Jin-a, a senior researcher on North Korea at the Korea Institute for Defense Analysis in Seoul. “North Korea knows that it will not be able to engage the United States in dialogue without South Korea.”

The two Koreas on Tuesday restored their shared hotline, bringing back the direct communication channel that had been defunct for 413 days, after the North pulled the plug in protest of what it claimed were the South’s failures to prevent activists from sending propaganda leaflets across the border in June 2020.

The restoration of the hotline on Tuesday coincided with the 68th anniversary of the armistice agreement that ended the three years of fighting in the Korean War on July 27, 1953.

It was not the first time that the North severed the channel of communication with the South in times of deteriorated relations. The direct line at Panmunjom dates back to 1971.

According to multiple sources in the Korean government, the inter-Korean consultations to restore the hotline were held very recently, with nothing definitive set on the ground even during the visit of U.S. Deputy Secretary of State Wendy Sherman to Korea from July 21 to 23.

During her trip to Asia, Sherman repeatedly called on North Korea to respond to the U.S. call for dialogue; once, following her meetings with her Japanese and Korean counterparts in Tokyo, and then reiterating the call during her visit in Seoul.

Pyongyang, which usually issues a critical message aimed at the United States during a visit by an American official to Korea, such as during Secretary of State Antony Blinken’s visit to Korea in March and U.S. nuclear envoy Sung Kim’s visit last month, was silent during Sherman’s recent visit to Seoul.

Some experts pointed out the prolonged famine in North Korea as another reason for its recent actions. North Korea has been reported to be facing one of its worst famines, which, coupled with the lockdown due to Covid-19 concerns and the ongoing UN sanctions over its nuclear weapons development, have been reported to be a mounting challenge for the regime.

“It seems that North Korea has had a moment of reckoning, as its deadlock situation has been ongoing, and it has had no outlets to improve its economy,” said Kim Jung, professor on North Korea studies at the University of North Korean Studies in Seoul. “Pyongyang may be thinking that it will need the help of Seoul if it wants to request [the United States and the international community] a lifting of the sanctions.”

The U.S. government has responded positively to the restoration of the inter-Korean hotline.

“The U.S. supports inter-Korean dialogue and engagement, and of course welcomes today’s announcement of restoration of inter-Korean communication lines, and we certainly believe that this is a positive step,” said U.S. State Department spokeswoman Jalina Porter on Tuesday. “Diplomacy and dialogue are essential to achieving complete denuclearization and establishing permanent peace on the Korean Peninsula.”

If it is Pyongyang’s intention to improve the inter-Korean ties for a dialogue with the United States, the U.S.-Korea joint military exercises scheduled to take place next month may be a test to its resolve.

North Korean leader Kim Jong-un in the Eighth Workers’ Party Congress in January openly criticized the joint military drills, stating that Seoul has repeatedly ignored its warnings to stop the drills, which Pyongyang sees as a violation of inter-Korean agreements.

“Training side-by-side with the Korean military, our Armed Forces abroad help keep the watch while proudly upholding the legacy of those serving before them,” he said. “Our partnership remains crucial to maintaining peace and stability today, and to expanding economic growth in a critical region of the world.”