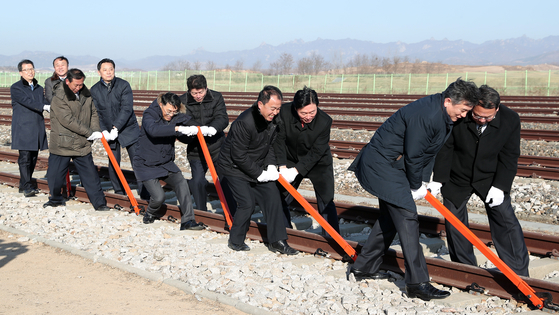 South and North Korean officials connect the rails between the two Koreas at Panmun Station in Kaesong at a symbolic groundbreaking ceremony on Dec. 26, 2018 to begin a project to reconnect their roads and railways. [JOINT PRESS CORPS]

Park Soo-hyun, senior Blue House secretary for public communication, told MBC radio Tuesday, “The direction of U.S. policy toward North Korea has been based on the [2018] Singapore summit. Similarly, wouldn’t we also want to start from the foundation of the existing agreement between the two Koreas?”

Park was asked about the resumption of joint projects based on the inter-Korean agreement of Sept. 19, 2018, including the excavation of the remains of soldiers killed in the 1950-53 Korean War.

“I think that various proposals should hopefully be discussed in the future,” he added.

The Singapore agreement was signed between North Korean leader Kim Jong-un and U.S. President Donald Trump in their first summit on June 12, 2018. President Moon Jae-in and Kim in the Panmunjom Declaration of April 2018 and Pyongyang Declaration of September 2018 agreed to move along reconnecting roads and railways among other inter-Korean cooperative projects.

Park also expressed hope for another summit between Moon and Kim before the end of Moon’s five-year term next May.

“Restoring the inter-Korean communication lines is the first step, and we are now standing at the starting line,” said Park. “An inter-Korean summit is another stepping stone, and the ultimate goal is to reach a peace process on the Korean Peninsula,” which he said would bring about denuclearization.

Pyongyang in June 2020 unilaterally cut off all inter-Korean communication lines in protest of what it claimed were Seoul’s failure to prevent activists from sending propaganda leaflets across the border.

The two countries’ leaders had been exchanging letters since April and agreed on the need to restore such severed communication, said the Blue House, which prompted speculation of another inter-Korean summit and the possibility of resuming joint projects.

“I expect that the restoration of the communication lines yesterday will have a positive effect on advancing and developing inter-Korean relations,” said Park in the radio interview. “Of course, this also encompasses the wish for this to be an opportunity to enable a virtuous cycle that moves along relations between the United States and North Korea.”

The two Koreas held a symbolic groundbreaking ceremony to modernize and reconnect roads and railways across borders in December 2018 as agreed in the leaders' summit. Moon and Kim agreed to hold a groundbreaking ceremony before the year's end in their Pyongyang summit. However, that project has been in limbo as North-U.S. negotiations came to a standstill in 2019.

Seoul officials have indicated that the joint roads and railways project could be a starting point for economic cooperation for the two Koreas, and the Moon administration has been searching for ways to resume it.

Lee Soo-hyuck, South Korea’s ambassador to the United States, in a press conference in Washington in January 2020 called the inter-Korean railway project “the one we need to push for most urgently,” given the fact that it is the most feasible and will take the longest time, out of all such joint projects proposed by the Moon government.

However, economic cooperation projects need to find a way around tricky UN and U.S. sanctions, and the South has to request exemptions from United Nations Security Council sanctions to bring in equipment and supplies to the North.

The U.S. State Department welcomed the restoration of the inter-Korean communication lines Tuesday, calling it “a positive step.”

Jalina Porter, principal deputy spokesperson for the State Department, told reporters, "I’ll say that the U.S. supports inter-Korean dialogue and engagement, and of course welcomes today’s announcement of restoration of inter-Korean communication lines, and we certainly believe that this is a positive step.”

When asked if this would help pave the way for dialogue between North Korea and the United States, she said, “Diplomacy and dialogue are essential to achieving complete denuclearization and establishing permanent peace on the Korean Peninsula.”

Likewise, Kurt Campbell, the White House National Security Council's policy coordinator for Indo-Pacific affairs, told reporters at an event hosted by the Korea-U.S. Alliance Foundation, "We are supportive of the dialogue and communication with North Korea.”

This is in line with the Joe Biden administration’s "calibrated" approach of being open to engagement with Pyongyang without any preconditions. 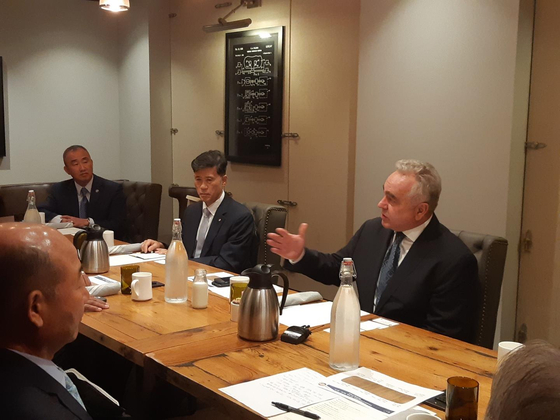 Kurt Campbell, the While House policy coordinator for Indo-Pacific affairs, speaks at a breakfast event hosted by the Korea-U.S. Alliance Foundation Tuesday at a hotel in Washington after the two Koreas restored their communications lines earlier that day. [YONHAP]

However, Seoul and Washington have not always seen eye-to-eye on the pacing of inter-Korean cooperation and denuclearization talks.

Seoul and Washington in June agreed to end a controversial working group meant to coordinate their approaches on the North's denuclearization, sanctions enforcement and inter-Korean cooperation. This was considered a conciliatory gesture toward Pyongyang, which has accused the working group as being a hindrance to inter-Korean ties, though it has also been a platform for the South to secure sanctions exemptions from the United States. Seoul and Washington agreed to continue discussions through other platforms.

Another variable in inter-Korean cooperation are joint military exercises between Seoul and Washington, which Pyongyang has vehemently protested, with annual summer drills expected to be held next month.

News of the exchanges of letters between the Korean leaders has prompted speculation of another summit being in the works, though the Blue House Wednesday denied such media reports.

Moon and Kim are in talks to hold a summit as part of efforts to restore relations, Reuters reported Wednesday, citing South Korean government sources, adding such inter-Korean talks could also help restart negotiations between Pyongyang and Washington.

Park Kyung-mee, a Blue House spokesperson, called the report “not true” and said that “there have been no discussions” on the matter.

In a move away from bellicose rhetoric, North Korean leader Kim attended an annual conference Tuesday to mark the anniversary of the armistice agreement that ended the Korean War and made no mention of strengthening his country's nuclear arsenal, according to state media Wednesday, unlike last year’s speech. He also made no mention of relations with Seoul or Washington.

Kim in his 2020 speech flaunted the North’s "reliable and effective self-defense nuclear deterrence.”

The South’s Defense Ministry and Unification Ministry confirmed Wednesday that regular daily phone calls took place with their North Korean counterparts through the hotlines as agreed upon the previous day.