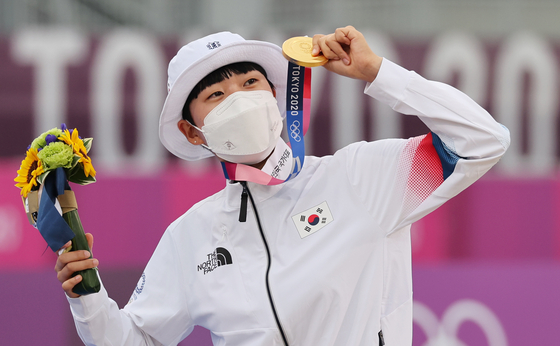 Archer An San celebrates her third gold medal of the 2020 Tokyo Olympics. [YONHAP]


Korea's An San won the women's individual archery competition at the 2020 Tokyo Olympics on Friday afternoon, becoming the first archer in Olympic history to win three gold medals at a single Games.

The match was fitting for a final, with things remaining neck-and-neck until the very end.

The two archers tied with 28 points in the first set, then took one set each to tie it 3-3. Osipova edged ahead in the fourth set by shooting 29 points to An's 27 points, heading into the final set in the lead. An, however, managed to return the favor in the fifth set, sending the match to a shoot-off.

The final was not An's first shoot-off of the day, as her semifinals against the United States' Mackenzie Brown had already involved one. An shot a 10 in that shoot-off as well, while Brown shot a 9.

Winning three gold medals was not the only way An made history at this year's Games.

One week ago, on the 23rd, An shattered a 25-year-old Olympic record by posting a score of 680 in the women's individual ranking round. A day later, An, alongside Kim Je-deok, became the first-ever winners of the inaugural Olympic mixed team archery event.

That victory gave the two the chance of becoming the first archers ever to win three gold medals, if they could win their respective team and individual events as well. Korea did go on to win both the men's and women's team events, but Kim was unable to pass the round of 16 in the men's individual event.

An went all the way, making history with three golds. This was the 20-year-old's first time competing in the Olympics.

Korea has so far won every single gold medal available in archery at the Tokyo Olympics. The final event — the men's individual competition — will finish tomorrow.

Although Kim Je-deok is out of contention, two-time Olympic gold medalist Kim Woo-jin is still in the competition. He will shoot in the round of eight at 9:56 a.m. tomorrow.