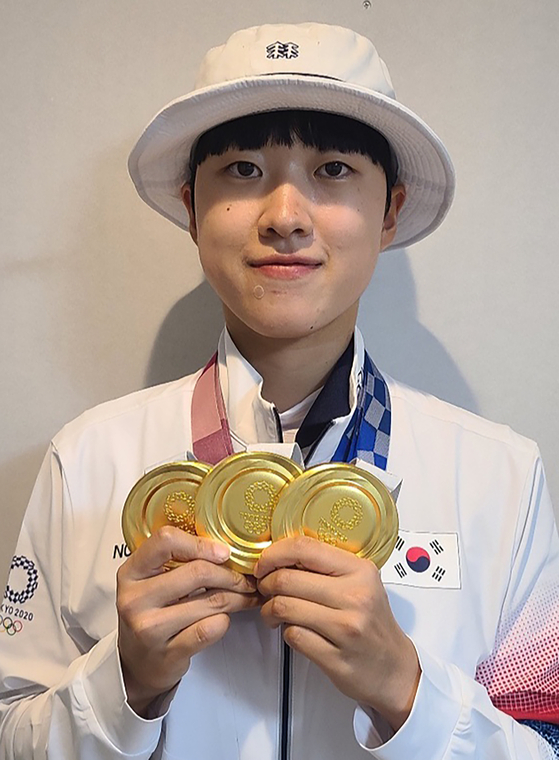 
With 20-year-old An San at the helm, the Korean archery team leaves the Tokyo Olympics having won four gold medals in five events.

Things started well for the national team, with An shattering a 25-year-old Olympic record by posting a score of 680 in the women's individual ranking round, on July 23. The women's team's combined point total of 2,032 also set a new Olympic record.

The next day, An and Kim Je-deok won Korea's first medal across all sports at the Games by securing gold in the inaugural mixed team archery event. With the win, the road was set for both An and Kim to potentially become the first-ever archers to take home three gold medals at a single Olympics. 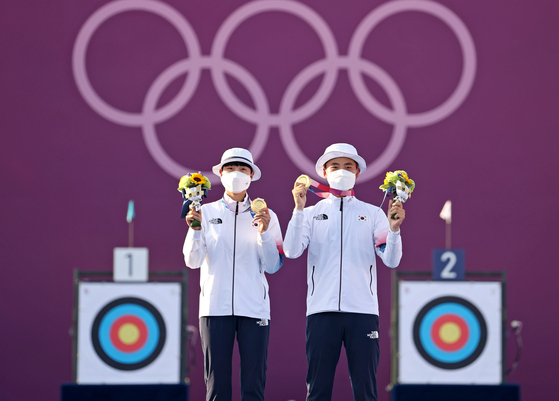 An San, left, and Kim Je-deok hold up their archery mixed team gold medals on the podium on July 24 at Yumenoshima Park Archery Field in Tokyo. [YONHAP]


On July 25, the women's archery team took home gold for the ninth consecutive Olympics by taking down Russia in the finals. The next day, the men's team did the same, beating Taiwan in the final. Both An and Kim now only had to win their respective individual competitions to achieve what no archer had ever had the chance to do before — the triple gold.

Kim unfortunately crashed out of the round of 16 the next day, however. The same happened to teammate Oh Jin-hyek, leaving only Kim Woo-jin in the men's individual competition.

The women seemed to share the men's fate, with Jang Min-hee dropping out in the round of 16 and Kang Chae-young failing to make it past the quarterfinals. 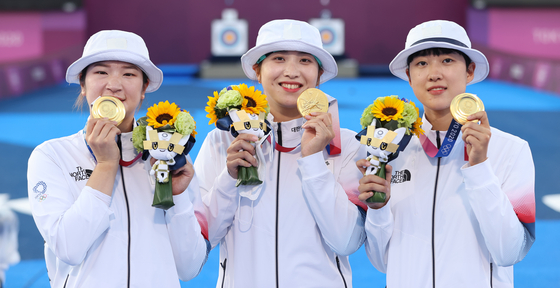 From left, Kang Chae-young, Jang Min-hee and An San of the Korean women’s archery team celebrate after winning the gold medal match in three straight sets against Russia on July 25 at Yumenoshima Park Archery Field in Tokyo. [YONHAP]


But An made the difference. On July 30, showing nerves of steel by winning two consecutive medal-deciding shoot-offs against the United States' Mackenzie Brown and Russia's Elena Osipova, An won her third gold medal at this year's Games and carved her name into Olympic history.

Back in the men's competition, Kim Woo-jin made it to the quarterfinals on July 31, but suffered an upset loss to Taiwan's Tang Chih-chun and ended Korea's chances of gold in the men's individual event.

Going into this year's Games, Korea's goal in archery was to repeat the success of Rio 2016, when the nation took home all four gold medals in the sport. That is just what they did, winning four gold medals once again thanks to the new mixed team event.


Korea's dominance in archery has been credited to a number of things, including the long history of the weapon's use in the country and the adoption of the sport at a young age. The domestic competition is also a huge factor, with the contest to earn a spot on the Korean archery team often said to be the hardest tournament in the world.


Qualifying for the Korean team is notorious for its fierce but fair and transparent selection process. Being an Olympic medalist or being world No. 1 is of no use when it comes to qualifying for Team Korea. Its the five days of qualifiers that matter. 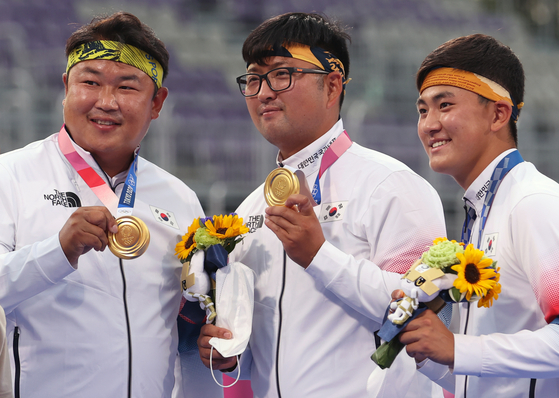 From left, Oh Jin-hyek, Kim Woo-jin and Kim Je-deok hold up their archery men's team gold medals on the podium on July 26 at Yumenoshima Park Archery Field in Tokyo. [YONHAP]


In addition to the fair national team selection process, the efforts of the Korea Archery Association and its coaching staff come in to play. After a competition, coaches write up hundreds of pages of reports to keep track of when and how the archers shoot best, allowing young archers new to the national team to reach their potential.


Ahead of the big stage, the association arranged a special set in the Jincheon National Training Center in Jincheon, North Chungcheong that resembled Yumenoshima Park Archery Field in Tokyo where the archers trained day and night, accepting even days with bad weather as opportunities to adapt to an uncomfortable environment.

Technology was behind it all, as Hyundai Motor Group, the longtime supporter of Korean archery, provided the archers with hardware that monitored their heart rate during their training, emulating a system introduced for viewers of the Tokyo Games, also providing a meditation app that helped them stay calm. 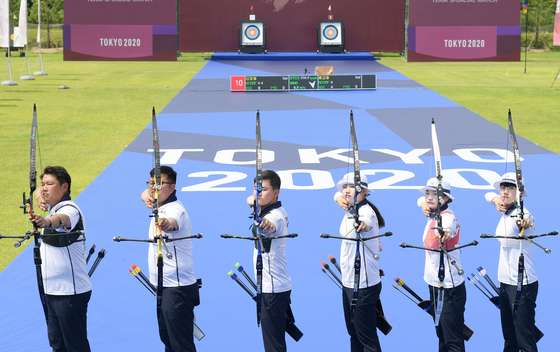 From left, Oh Jin-hyek, Kim Woo-jin, Kim Je-deok, Jang Min-hee, Kang Chae-young and An San pose for a picture during practice on June 28 at Jincheon National Training Center in Jincheon, North Chungcheong where a special set was made to resemble Yumenoshima Park Archery Field in Tokyo. [JOONGANG ILBO]


During training, archers were able to practice with high precision shooting machines picking out the best-fitted arrows, which is crucial in their performance. Archers fired shots on electronic targets that kept the record of scores and shooting positions using artificial intelligence that could later be analyzed and reviewed.

Building onto that robust support, the world’s best archers proved that they are still the best in the sport, taking home four of five gold medals. Korea has now won 25 of the 42 gold medals available in archery since the 1972 Munich Games.