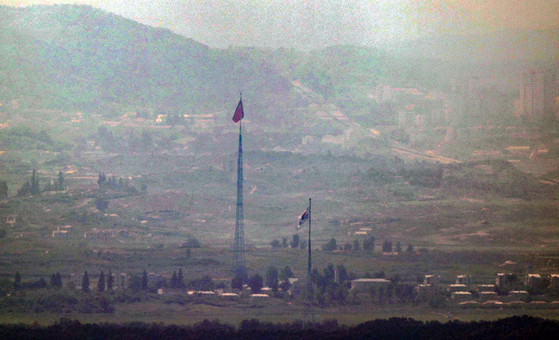 The flag of South Korea, right, and the flag of North Korea, left, stand close together in a border area between the two Koreas on July 27. [YONHAP]


Contrary to the Blue House’s denial of plans to postpone Korea-U.S. joint military exercises this month, a Unification Ministry official recently called for a delay in the exercises for the sake of inter-Korean and U.S.-North Korea dialogue.

“It would be best to postpone the Korea-U.S. joint military exercises,” the official told a group of reporters Friday.

Though the official first cited the country's spike in Covid-19 infections as reason for the delay, he added that “engagement with the North can be actively pursued” following a delay in the military exercises.

“This is a prime time to engage the North through Korea-U.S. cooperation,” the official said. “By taking this opportunity, Korea and the United States may be able to bring about a very effective achievement for peace and denuclearization of the Korean Peninsula.”

Following the restoration of the inter-Korean hotline last week, the question of whether the Moon Jae-in government will plan an inter-Korean summit and whether it will consider postponing the U.S.-Korea military exercises scheduled in August has been floated by local media outlets.

The Blue House denied such plans.

“There have been no talks between the two Koreas on hosting an inter-Korean summit in person or virtually,” an official in the Blue House told the press on July 27, the day the hotline was restored.

The official emphasized that restoring the hotline and holding the U.S.-Korea joint military exercises “are two separate issues.”

The two Koreas re-instated their shared hotline last Tuesday, bringing back the direct communication channel that had been defunct for 413 days, after the North pulled the plug in protest of what it claimed were the South’s failures to prevent activists from sending propaganda leaflets across the border in June 2020. The direct line at Panmunjom dates back to 1971.

Most recently, North Korean leader Kim Jong-un has denounced the exercises during his meeting with commanders and political officers of the Korean People’s Army (KPA) in Pyongyang from July 24 to 27.

“Saying that at present the hostile forces systematically keep bolstering up their capabilities for making a pre-emptive attack on the DPRK [Democratic People's Republic of Korea] and increase armaments while intensifying all sorts of frantic and persistent war drills for aggression, he noted such situation has hardened the determination and fighting will of the KPA to eradicate the root cause of the evil cycle of escalating tensions,” North Korea's state-run Korean Central News Agency reported on Friday.

The most recent set of exercises was held in March, in the form of a computer-simulated command post exercise.

A set of exercises are scheduled for this month.

The U.S. government has emphasized that all decisions on the joint military exercises should be made jointly between the United States and Korea.

“The ROK-U.S. Alliance remains at a high level of readiness, and continues to maintain a robust combined defense posture to protect the Republic of Korea against any threat or adversary while implementing and maintaining prudent preventive control measures to protect the force,” a spokesperson of the U.S. Department of Defense told the Voice of America on Saturday. “Combined training events are a ROK-U.S. bilateral decision, and any decisions will be a mutual agreement.”

Some experts in Korea cautioned against giving into the North’s pressure to delay the military exercises with the United States.

“It is the principle of the Biden administration’s North Korea policy that there should be no inducement without active change from North Korea,” said Shin Beom-chul, researcher on foreign policies at the Research Institute for Economy and Society. “The administration has also emphasized the importance of the joint military exercises, to the point that it provided vaccines to the South Korean military.

“If the Moon Jae-in administration wants to postpone the joint exercises on the grounds of improving inter-Korean relations, the action must be premised on a new strategy,” he added. “This new strategy must be drafted based on the fact that even the reduced scale of joint exercises over the past three years has not brought about significant response from the North."