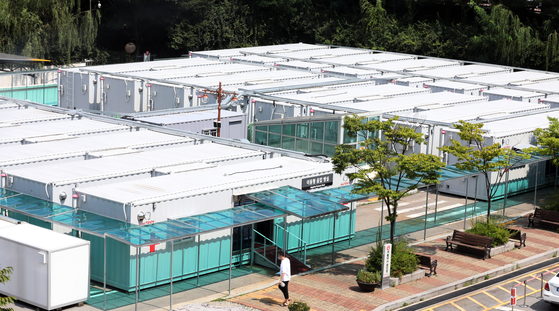 Negative pressure isolation rooms for Covid-19 patients built in a parking lot of Seoul Metropolitan Seobuk Hospital in northern Seoul on Friday. The rooms were built last December amid Korea's third wave of Covid-19. Korea is currently experiencing another wave, with daily cases remaining around 1,000 since early last month. [NEWS1]


Korea is running out of sick beds for patients with severe symptoms of Covid-19 as the country continues to weather its fourth wave of the virus.

The number of beds available in the intensive care units for Covid-19 patients dropped to just two in Daejeon, two in North Gyeongsang, four in Sejong, seven in Gangwon, six in South Jeolla and eight in Jeju on Saturday, according to the Central Disease Control Headquarters of the Korea Disease Control and Prevention Agency (KDCA).

Patients requiring oxygen therapy, usually those who are experiencing some level of respiratory failure, are treated at these intensive care units.

Korea has been recording daily cases around 1,000 since early July. A large majority of them were focused in the greater Seoul area, but growing numbers have been detected in other regions as well.

The average number of daily infections throughout the country last week was around 1,500. Seoul, Incheon and Gyeonggi had the highest daily average at around 970, followed by Busan, Ulsan and South Gyeongsang at around 177 and Daejeon, Sejong and the Chungcheong regions at around 152.

The number of patients in need of intensive care has also been on a steady rise.

Saturday marked the first time since January that the number of patients in intensive care units rose above 300. The number was 317 on Jan. 21.

“As of Aug. 1, we have 360 beds available out of 801 total across intensive care units for Covid-19 patients,” said Sohn Young-rae, a senior official of the Ministry of Health and Welfare, during a press briefing Sunday.

Of these, 163 were in the greater Seoul area, and the rest scattered throughout the country.

The beds have dropped drastically compared to a month ago, when there were 609 beds available throughout the country on June 29, according to the government.

Referring to the spike in cases from early last month as the country's fourth wave, the government rolled out strengthened social distancing guidelines, which have banned meetings of more than four people during the daytime and meetings of more than two people after 6 p.m. in the greater Seoul area. The current measures are in place until Aug. 8.

“We will observe the situation this week and make a comprehensive judgment on whether the climbing cases take a downward turn,” Sohn said. “If the situation does not improve from here, we will have to find out where the loopholes are to strengthen the system further.”

The government is aiming to have 70 percent of the population vaccinated through September, and will be beginning vaccinations for those aged between 18 and 49 this month.

The KDCA will offer vaccines based on mRNA — Pfizer or Moderna — to around 2 million people in the age group who need the jabs first, according to authorities, from Aug. 17.

The priority group includes employees of essential services such as public transportation drivers, delivery workers and street cleaners; people who work in close contact with children such as hagwon (cram school) teachers; employees of high-risk facilities such as restaurants, noraebang (singing rooms), PC bang (internet cafes); as well as people who may not have been well informed about the vaccination system, such as disabled people, foreign workers and international students.

Reservations for these groups will be available from Aug. 3 to 6.

Amid the spread of the highly contagious Delta variant, the government will also give another chance to people over 60 who haven’t been vaccinated yet.

Around 1.26 million unvaccinated people aged 60 to 74 will be eligible for AstraZeneca vaccines from Aug. 5 to Sep. 3.

Around 600,000 unvaccinated people over the age of 74 can get Pfizer vaccines by booking directly at a vaccination center at any time.

In the fourth quarter, the country will open up vaccinations to anyone who wants one, according to the KDCA.

There were three more virus deaths, raising the death toll to 2,098.