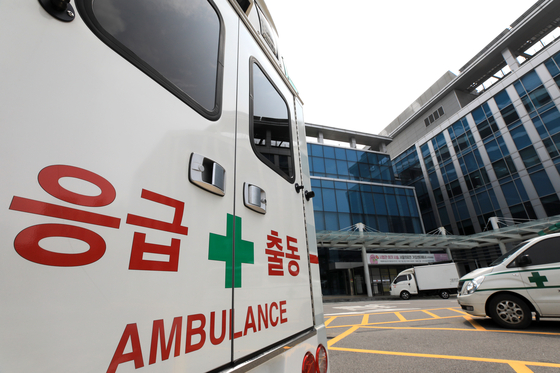 According to the government, the country has a total of 810 ICU beds, and only 298, or 36.7 percent of the total, were vacant as of 5 p.m. Wednesday. The file photo shows an ambulance parked in front of a hospital in Seoul on Thursday. [NEWS1]


With the explosive rise in new Covid-19 infections, the government is scrambling to find more hospital beds for the sick.

“We are in talks with [the largest] hospitals to secure more intensive care beds,” Sohn Young-rae, a senior epidemiological strategist at the government’s Central Disaster Management Headquarters told reporters on Thursday.

The government is responding to a rise in the number of critically ill patients as daily new infections have been surpassing 1,000 for over a month.

Korea confirmed 1,987 new Covid-19 cases on Thursday, a day after the country reported a record 2,223 infections. 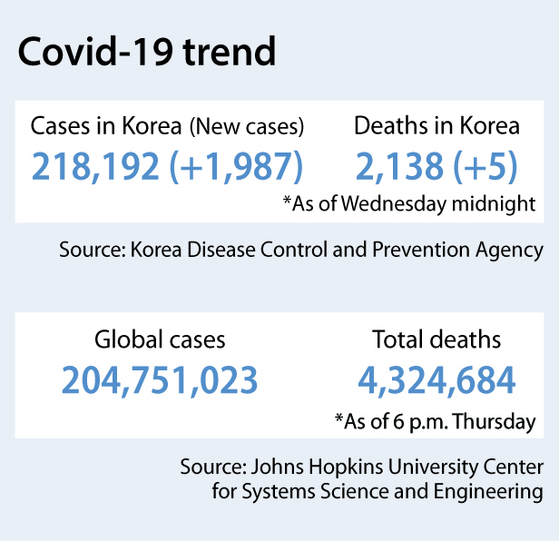 There were three more deaths, bringing the death toll to 2,138.

The Korea Disease Control and Prevention Agency (KDCA) said there were 372 critically ill Covid-19 patients as of Wednesday midnight, with that number remaining above 300 for the 13th straight day.

Patients in critical condition refer to those who require oxygen treatment (such as high flow oxygen), mechanical ventilation or being put on a respirator, extracorporeal membrane oxygenation (ECMO), or continuous renal replacement therapy (CRRT).

With more Covid-19 patients becoming seriously ill, the number of patients on ECMO — the final stage of life support given to the sickest patients — is hitting a new high in the fourth wave of Korea's pandemic.

The number increased to 46 people on Wednesday, the day when the country reported its record-breaking number of new Covid-19 cases.

According to data from the Korean Society for Thoracic & Cardiovascular Surgery, the number of Covid-19 patients on ECMO surged to a record high of 53 on Tuesday.

The society noted that half of the country’s 109 ECMO-treated patients are infected with the coronavirus.

Hallym University Sacred Heart Hospital in Anyang, Gyeonggi, is using eight out of its 11 ECMO machines for Covid-19 patients — and all eight patients were hospitalized in the last two to three weeks.

“Patients beds fill up as soon as someone gets released. Since we have the personnel and facilities such as an ECMO Center, we accepted all the requests we received, but can't anymore,” Kim said.

As new cases rise, it may be only a matter of time before the country’s sick beds are filled.

In greater Seoul, where Covid-19 cases are spiking, 53 beds are open in the city itself, 66 in Gyeonggi and 27 in Incheon.

Daejeon and Sejong, cities in central Korea, have zero vacancies.

The numbers of available ICU beds in many regions remain in the single digits — three in North Gyeongsang, six in South Gyeongsang, eight in North Jeolla and five in South Jeolla.

Many of these ICU beds for critical care are in hospitals without ECMO capabilities, the last recourse for the sickest patients when even ventilators aren’t enough.

Many of the fourth wave patients in critical states are in their 50s or younger.


During the third wave of the pandemic in last December and January, Covid-19 patients who turned critically ill were largely people in their 70s and 80s with underlying diseases. When they showed no improvement or were reduced to a hopeless state, relatives used do-not-resuscitate (DNR) orders to stop treatment.

Now, younger and healthier people are getting infected with the virus and becoming critically ill.