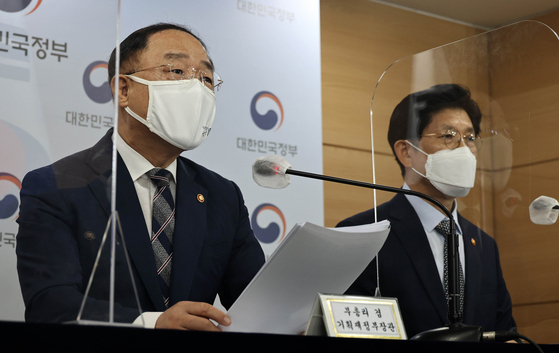 KIM HYUN-YE
The author is the head of the P team at the JoongAng Ilbo.

“Moonset does not mean the moon is leaving the sky.”

I saw that sentence in a blog. The name of the blog is “Big brother Yoon’s Rich Country, Rich People.” The owner of the blog is 75-year-old Yoon Jeung-hyun, head of the Yoon Economic Institute who served as the minister of strategy and finance in the Lee Myung-bak administration. Yoon collected the records of his service as the minister, and the record stops with that farewell address on June 1, 2011.

I recalled the former minister who stepped down 10 years ago after all the news about Hong Nam-ki, the vice prime minister for economic affairs and finance minister. Coincidentally, Hong broke Yoon’s record as the longest serving economic minister in early April.

The longest-serving finance minister made an apology on July 28, but the public opinion was cold. Hong presented his “words to citizens for the stability of the real estate market,” and while he started by saying he was sorry, his conclusion evoked rage. “Real estate market stabilization is not something the government can achieve alone. That is only possible when all participants in the real estate market, or the entire people, work together. In order to prevent the so-called tragedy of the commons, we all need to collect wisdom and cooperate,” he pleaded.

The tragedy of the commons is a theory published by American biologist Garrett Hardin in 1968 about a shepherd prioritizing their own interests and having their sheep grazing on grasses freely, leaving the common land useless. Hong cited the tragedy of the commons and emphasized not buying houses. Is the tragedy really because of the “entire people?” Should “ignorant people” really be held accountable for soaring real estate prices, steep rises in rent and consequent tax bombs?

What the vice prime minister must consider as “the common land” is something else — the national treasury. The government drew up a whopping 33-trillion-won ($28.6 billion) supplementary budget to hand out relief grants after dividing the people into the upper 88 percent and the lower 12 percent.

The national debt is approaching 1 quadrillion won. In early 2011, free school meals led to the welfare populism debate among politicians, and former minister Yoon, then the keeper of the treasury, famously said, “Treating the national treasury as an ownerless common land and bringing cows to graze on the grass without a plan may lead to the tragedy of the common, leaving the land devastated.” This is the real tragedy.