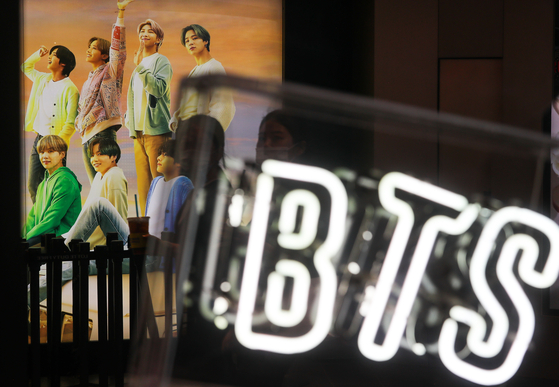 K-pop is as much a hit on the stock charts as it is on the music charts, with the market capitalizations of the big four agencies – SM Entertainment, YG Entertainment, JYP Entertainment and HYBE – up 78 percent this year.

They are now worth collectively 15 trillion won ($13 billion).

K-pop entertainment companies have struggled since 2012, with the business entering a dark winter following a heyday with the release Psy’s Gangnam Style.

They have started to make their comeback in recent years with the successes of BTS, Blackpink, NCT127, STAYC and aespa and their development of global fan bases.

More than half of HYBE’s sales are overseas. Last year, overseas sales were 61.1 percent of all of HYBE’s sales excluding online sales. In the first quarter of this year, that ratio hit 62.3 percent.

“While globally digital music sells better than actual albums, in Korea conventional album sales have been growing,” said Lee Sun-hwa, a KB Securities researcher. “This is because some of the customers purchase more than one album to help the artists to rank higher on the charts. It seems Korea’s fan culture has spread overseas, which results in increasing sales.”

YG Entertainment, which is known for managing Big Bang, reported net profit of 8.6 billion won in the first half, from a 24.6-billion-won net loss in full-year 2020.

Blackpink, which it manages, ranked 13th on the Billboard’s singles chart in August 2020. By October, it was No. 2.

JYP Entertainment, which used to manage Rain, is up 33 percent in the past year. It manages NiziU, a girl group that debuted in December 2020 and has sold 450,000 albums. It set a girl-group record with two songs breaking 100 million on Japan’s Oricon weekly streaming chart.

“While in the past, expansion toward the global market was an option, today it’s a basic requirement,” said an official in the entertainment industry. “There are several artists who consider overseas market strategies from the start.”

Some of the K-pop management companies are buying U.S. companies to help their expansions abroad. In April, HYBE spent $1 billion to buy Ithaca Holdings.

The pandemic is changing the K-pop business model.

Whereas in the past concerts and fan meetings played a crucial role in maintaining or expanding the number of fans, since the pandemic, non-face-to-face initiatives, including artists sharing their everyday lives with fans via social media, have become major tools.

As a result, Korean management agencies are now taking interest in operating “platforms.”

“The biggest issue is how to hold those fans within the platform and provide entertainment,” said Wi Jong-hyun, business professor at Chung-Ang University.