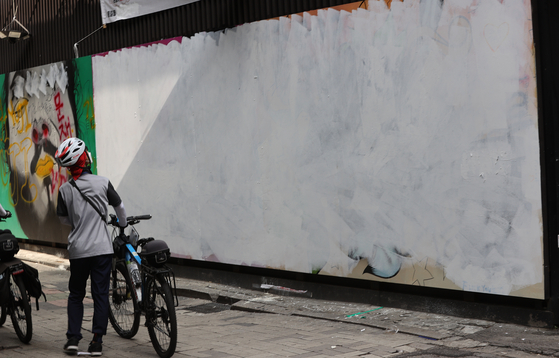 The wall next to a bookstore in Jongno District, central Seoul, is completely covered in white paint since Wednesday morning. [YONHAP]


A civic group on Monday filed a criminal complaint for defamation against the bookstore owner who commissioned a series of wall paintings outside his shop that refer to salacious rumors about the wife of former prosecutor general and presidential frontrunner Yoon Seok-youl.

Meanwhile, the store owner filed his own police complaint against a conservative YouTuber for defacing the murals with black paint on Saturday.

The dueling complaints brought to the police highlight a raging debate over freedom of expression and feminism, with both sides of the political spectrum accusing the other of abusing free speech and infringing on the right to political expression.

Unsubstantiated rumors circulating around the internet about Yoon's wife Kim Keon-hee said she worked as a hostess under the alias of Julie at a nightlife establishment before marrying Yoon.

The paintings, which lined the ground-level exterior wall of the Hong Gil-dong secondhand bookstore in Jongno District, central Seoul, attracted a daily crowd of angry supporters, and also detractors, of the former prosecutor general over the depiction of a blonde woman with a caption which read "Julie's dream! Becoming the first lady!" until the words were painted over on Friday morning by a store employee.

Another caption under a painting of a red heart pierced by a sword listed the names of seven high-profile men, including Yoon, with whom his wife Kim Keon-hee is rumored to have slept. The caption, which read "Julie's men," was also painted over in white paint along with the names, though the images of the woman and the heart remained.

But that failed to deter visitors from rewriting the original words in permanent marker around Friday lunchtime, leading the store employee to once again cover-up the words that afternoon.

Then, a conservative YouTuber covered the images of the blonde woman and the heart with black paint, leading the store owner to paint over the entire wall with white paint.

After ordering the removal of the references to the online rumors about Kim in the paintings, the store owner hung a banner with the phrase "You can enjoy freedom of expression as much as you want" on the wall, in an apparent jab at critics of the painting who took offense at the words which had been on the original painting.

While it is unlikely that the civic group's complaint against the bookstore owner for defamation will result in prosecution — because defamation relies on the agreement of the injured party for indictment to proceed — the case does highlight the societal boundaries of acceptable political expression.

Some members of the ruling Democratic Party (DP), such as former justice minister and presidential candidate Choo Mi-ae — a prominent political adversary of Yoon — said "the close contacts of a presidential candidate should be blameless" and suggested the rumors carried enough weight to be thoroughly probed.

However, others within the ruling party, such as National Assembly Deputy Speaker Kim Sang-hee, called the mural "a blatant rights violation," highlighting the discomfort felt by some on the political left in attacking a woman based on rumors of her past occupation.

The Korean National Council of Women issued a statement on Friday, calling the mural a "serious insult to women and a deplorable act that undermines gender equality, whether or not there be any truth [behind the rumors]."