Woo Ha-ram dives into fourth for a new Korean record

Woo Ha-ram dives into fourth for a new Korean record 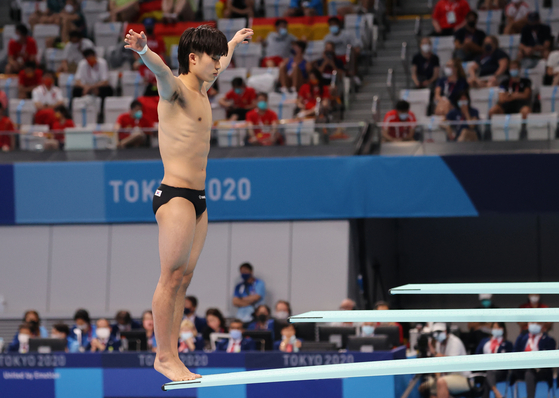 Woo Ha-ram prepares to dive in the final of the men's three-meter springboard event on Tuesday in Tokyo. [YONHAP]


Korea's Woo Ha-ram narrowly missed out on a medal in the men's three-meter springboard diving contest on Tuesday, finishing in fourth place to become the highest-ranked Korean diver ever at the Olympics.

Woo was a serious contender for a medal spot throughout the first few dives, scoring in the high 70s and 80s to hold onto a spot in the top five. His third dive, a forward four-half somersault, earned him a huge 91.20, the highest scoring dive of the round.

Woo is the only Korean diver to have earned an Olympic berth two years in advance at the FINA World Championships held from July 17 to 18, 2019 in Gwangju where he qualified for two individual events.

At the 2016 Rio Olympics, he wrote new Korean history as the first diver to advance to the finals of the 10-meter platform event, finishing 11th, the highest-ever placement by a Korean diver at any Olympics — until now. Korea is yet to win a medal in diving.

He also competed in the three-meter springboard in Rio, finishing 24th.

Woo is part of a new generation of athletes setting records in sports that haven't traditionally been considered Korea's strong suit. While it isn't possible to set a new Korean record in diving, his fourth-place finish essentially does the same thing — the greatest result for a Korean athlete ever.

Hwang Sun-woo is another athlete that has emerged as a trailblazer in Tokyo, setting two Korean records and an Asian record in the swimming pool. On Sunday, Yeo Seo-jeong became the first Korean women ever to medal in gymnastics, winning bronze in the women's vault.

The preliminary round for the individual 10-meter platform event, which will also include Kim, begins at 3 p.m. on Friday.