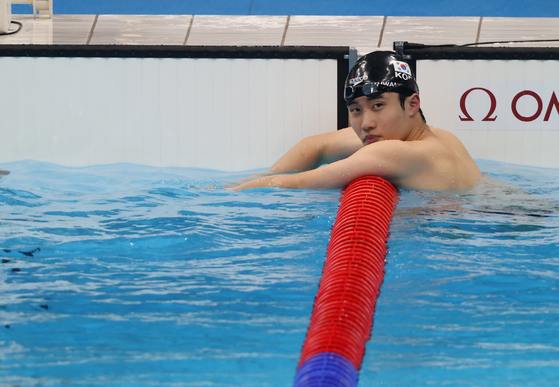 Hwang Sun-woo reacts at the end of the men's 200-meter freestyle final on Tuesday. [YONHAP]


Korea's Hwang Sun-woo missed the podium in the men's 200-meter freestyle on Tuesday, falling back to seventh over the final 50 meters after leading the pack for three lengths.

Hwang struggled to keep up the pace throughout the race, starting with a blisteringly fast first length, at 23.95 seconds, but then slipping back to 28.70 seconds by the fourth length. The two British swimmers were all able to maintain a time under 27 seconds for the final three lengths.


Hwang, who set a new Korean record during the preliminary round, may have missed out on a medal in the men's 200-meter freestyle, but he still became the first Korean swimmer since Park Tae-hwan in 2012 to swim in an Olympic final.

And his Olympics is far from over. Hwang will be straight back in the water later today for the men's 100-meter freestyle at 7:02 p.m., with the final following on Thursday at 11:37 a.m.

On Friday he will then begin the men's 50-meter freestyle.