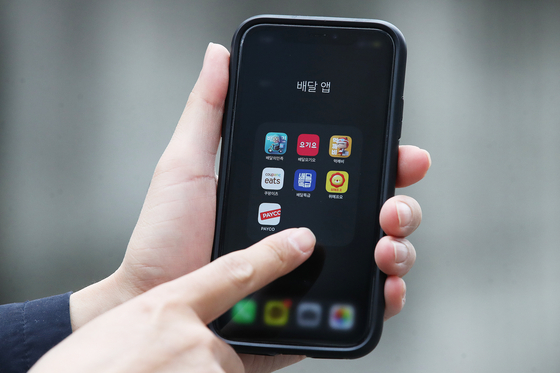 Older Koreans are becoming a force online, with their app and website use and spending rising quickly.

They were already buying a lot of food and binge watching on Netflix before the pandemic. Life and work stuck at home have only made them more active online and on apps.

Overall online credit card purchases were up 35 percent in 2020, according to Hana Institute of Finance on Wednesday.

This increase was largely led by people 50 years old or older.

The biggest increase in credit card spending was by people 60 years old or older, up 55 percent. Those in their 50s trailed at 50 percent, and for those in their 40s, card usage online was up 42 percent.

Online credit card purchases by people in their 30s were up 27 percent, for those in their 20s, it was up 25 percent, and for teens 20 percent.

Among those 60 years old or older, use of these services surged 350 percent year-on-year, followed by those in their 50s, at 255 percent.

This was a stark contrast to their younger counterparts, where such payments increased 92 percent among those in their 20s.

Spending by people in their 50s and 60s on delivery apps and online video streaming services such as Netflix grew sharply in 2020.

Spending on delivery app services including by those in their 50s when compared to the previous year grew 163 percent, while spending on these apps by people in their 60s increased 142 percent.

The situation was similar on online shopping malls.


Credit card purchases on Coupang by people in their 50s increased 123 percent, while spending on Coupang by those 60 years old or older grew 148 percent.

Coupang spending by those under 40 increased less than 90 percent.

One of the noticeable trends during the pandemic was the significant increase in the purchase of luxury goods online.

Last year, overall online purchases of luxury goods grew 78 percent, with the majority of these purchases made by those in their 20s and 30s.

Second-hand purchases by people in their 20s grew 68 percent.

Park Sang-hyun, an analyst at the institute, said even after Covid-19 situation eases and life returns to normal, the current digital spending trend will continue.

“With the number of people living alone growing and the aftermath of Covid-19 continuing, digital spending will likely increase among people of all ages,” said Park. “Related information and data show that the consumer trend for the convenience, cost efficiency and psychological satisfaction in the digital environment will continue.”