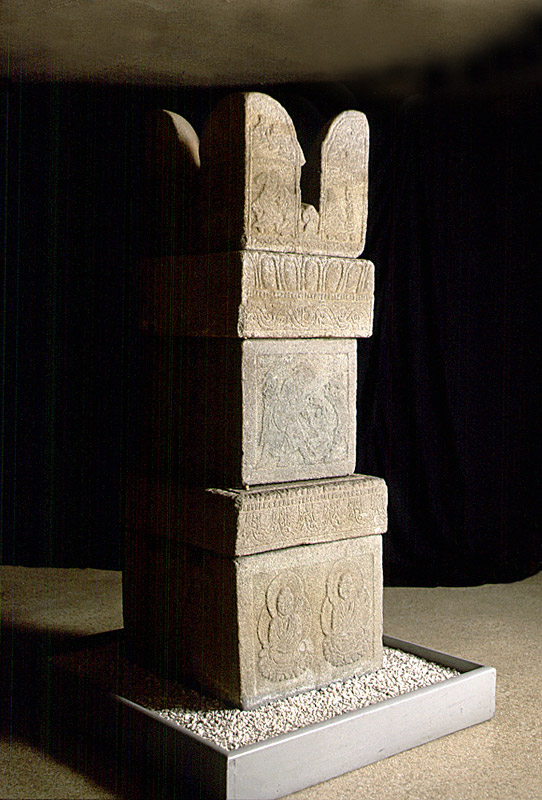 This kind of stupa dates back to the Chinese Wu and Yueh period. Quian Hongshu, the last king of Wu and Yueh, first built 84,000 miniature stupas made of gold, silver and iron and enshrined the sutra in all of them, imitating the anecdote of King Asoka of the Indian Mauryan Dynasty who is said to have divided Sakyamuni's true body sarira into 84,000 portions and enshrined them in as many pagodas.

This stone stupa, the only extant one of its kind in Korea, is on display at the Dongguk University Museum. The stupa was found on the site of an old temple in Cheonan City. As there is no record left about the temple, even the name of the temple is unavailable. Judging from the remaining portion of stone terrace and foundation stones and fragments of roof tiles, the temple is believed to date to the Goryeo period (918-1392).

As much of the stupa has long disappeared, it was only partially restored with five remaining stone parts. Unlike typical Korean-style pagodas or stupas, the stupa has no clear distinction between the foundation and the main body. It looks as if two lidded caskets are piled up one upon another, with donkey ear-shaped ornament installed on the upper casket. A square base stone is installed on a hexahedron which is decorated with a design of Buddha's pedestal.

On the top of the base is laid another hexahedron which deems to be the main body of the stupa. On all sides of the body-like portion are carved tales of Buddha's former life. There is a hole in the center of the upper portion of the body. The hole is presumed to have enshrined the sutra. The donkey ear-like top portion has an inscription telling of Sakyamuni's life in two stages. This stupa which has a variety of sculptures on all sides seems to have been influenced by that of China. With its uniqueness and peculiar shape, this stupa is of great value for the study of Buddhist stonework.