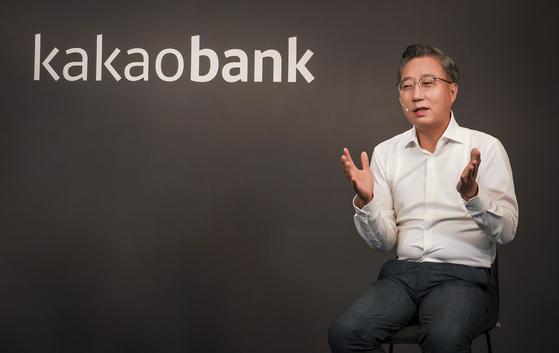 KakaoBank CEO Yun Ho-young talks during an online press briefing held last month ahead of its listing on the Korea Exchange. [KAKAOBANK]


KakaoBank rose 12 percent Monday taking it two spots higher in Korea’s market capitalization rankings, from No. 11 when it listed Friday to No. 9.

It is now bigger than Celltrion, the biopharmaceutical company.

Before the listing, concerns had been expressed about the pricing of KakaoBank, and many retail investors dumped their stocks on the first day of trading.

On Friday, Morgan Stanley Capital International (MSCI) said it would be adding the stock to its indexes as a large cap effective Aug. 23. Inclusion in MSCI indexes can act as a support on price as many fund managers track the indexes and have to buy the newly added shares to keep their portfolios balanced.

MSCI announces changes to its indexes on a quarterly basis, however stocks can be included in its indexes on listing if the stock meets free float market capitalization thresholds.

Analyst Kim Dong-young of Samsung Securities wrote in a report Monday that KakaoBank's weight in the MSCI Emerging Markets Index is expected to be around 0.04 percent based on the Friday's closing price.

"There will be spike in trading volume of the bank's stocks on Aug. 20," Kim wrote, with reference to the last trading day before inclusion into the index. He is advising clients not to rush into the shares given the high price-earnings ratio of the stock.

According to the Korea Exchange Monday, KakaoBank's price-earnings ratio was at 254 times, while KB Financial Group's was 5.52 times and Shinhan Financial Group’s was 5.49 times.

Analysts say that the pricing of Korea’s first internet-only bank is a challenge.

Koo Kyung-hoe of SK Securities issued a "neutral" recommendation on KakaoBank shares in a report Monday noting that the shares have already passed the brokerage's target price of 64,000 won.

Koo wrote that considering the growth potential of the bank and its relationship with Kakao the bank being valued higher than any other local banks can be justified.

"It is still very difficult to come up with a valuation for an internet-only bank that is still very new in Korea," said analyst Kim Ji-young of Kyobo Securities.

Krafton, a game developer well known for its PlayerUnknown's Battlegrounds (PUBG) battle-royale game, begin trading Tuesday. Demand for the shares was weaker than expected, as the oversubscription was far lower than most recent issues.

The 498,000 won IPO price gives the company a market capitalization of 24.4 trillion won for a price-earnings ratio of 43 times 2020 net profit.

On Monday, a day ahead of its listing, Krafton announced it will start taking applications for participation in the second alpha test of its to-be-released follow-up game PUBG: New State. The closed testing will be held for three days from Aug. 27.

The game is key to the company’s future as it could help it avoid being a one-hit wonder.