Meet the actors ready for roles other than the 'foreigner'

Meet the actors ready for roles other than the 'foreigner'


Foreign actors in Korea tend to be typecast as villains — such as members of the mafia, soldiers from the opposing side or thugs — or as mysterious strangers who briefly offer help to protagonists before disappearing.

Their dialogue is mainly in English, or sometimes in other languages, but rarely in Korean and if they are given Korean lines, it is usually to illustrate their characters' inefficiency in the language.

However, Netflix sitcom “So Not Worth It,” which was released on Netflix in June, aims to dispel the stereotypes surrounding foreign actors and the roles they play.

The story revolves around the lives of a group of students with multicultural backgrounds living in the international dormitory of a Korean university. Although they may appear “foreign,” these students are familiar with Korean culture and fluent in Korean.

Three of the main characters are played by Americans Carson Allen, Terris Brown and Joakim Sorensen from Sweden, who portray Carson, Terris and Hans. For Sorensen, “So Not Worth It” was also his screen debut as an actor after being active as an entertainer since 2018.

In a recent interview with the Korea JoongAng Daily, the three actors shared what it was like to portray characters who were deemed part of the group instead of playing roles as outsiders, as well as their hopes for how the sitcom will change the perceptions of foreign actors active in Korea. The following are edited excerpts. 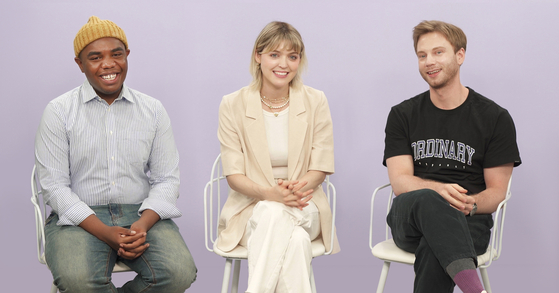 From left: Actors Terris Brown, Carson Allen and Joakim Sorensen talk about their experiences featuring in the Netflix sitcom “So Not Worth It” at the Korea JoongAng Daily’s office in Sangam-dong, western Seoul. [KIM EUN-KYEOL]

Q. Can you please introduce your characters to us?


A. Brown: The character Terris — he is sort of like a Casanova. He thinks he’s smarter than everybody else — well he does have good grades — and once you see the show you’ll see he slowly starts to understand more about himself and goes through some slight changes.

Allen: My character Carson, she’s a third year architect major, she loves Korean food, alcohol, hanging out with her friends, she sleeps a lot, she’s a little on the messy side as far as hygiene but I see her as kind of the rock of the friend group. She’s definitely the one people go to when they have an issue or maybe something that they want some advice on, or just a friend to listen to.

Sorensen: Hans is very compassionate about things and he’s very into human rights, environmental issues, those sort of things. He has these strict kind of rules he follows and like me, I think that if everybody follows these set of rules the world will be a much better place to live in but unfortunately people do not follow the rules, which aggravates him sometimes. 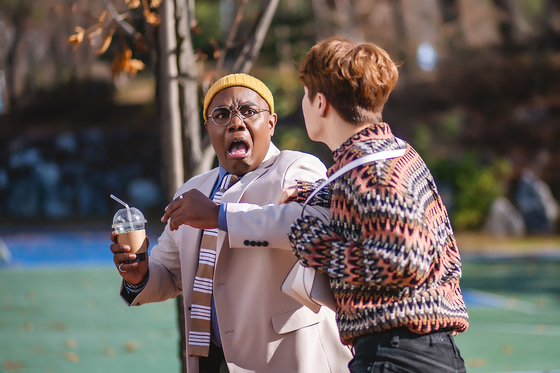 Actor Terris Brown as Terris, the casanova in his group of friends.[NETFLIX]


For Allen and Brown, you were active as actors prior to the sitcom. Was featuring in a sitcom different from your past acting experiences?

Allen: I would have to say working on a sitcom was definitely different than anything I've done previously. It was also difficult because we were about halfway through filming and we still didn’t know if they were going to put in the laugh track or not. So we didn't even know exactly how the sitcom was going to be — was it going to be super retro with the laugh track meaning we would need to give more time in between the lines? So it was kind of hectic in that sense and also a sitcom in this type of comedy, you really are being over-the-top and you are exaggerating your character and that's not easy for an actor to do because you're also trying to make it seem natural and you don’t want to come off as cringey.

Brown: In my experience, filming a sitcom was just completely different than anything I've done so far. Like Carson said, you have to be more over-the-top but also make people believe your character, which was really hard. And then of course, just memorizing all the lines in Korean, it was just a whole task in itself.

Allen: I think comedy is also hard because you end up over-rehearsing. We all knew the jokes forward and backward so it was hard to gain whether or not a joke was funny while we were filming it because we already know the punchline. So it was really hard having that confidence because we were just over-rehearsed so that going back and forth about whether it was funny or not was really stressful.


The show must have been also meaningful for you in a sense that you were very much part of the story instead of merely portraying a role that accentuated your status as a foreigner.

Allen: It was very meaningful for me definitely, because I think this was the first time I’ve ever played a role where, even though we are in an international dormitory, and so it was understood that we were foreigners, it was never emphasized. I was never a foreign roommate — I was Se-wan's roommate. I think that’s really important because when we always emphasize the word foreign, it kind of builds an invisible distance between us and Koreans at times. [When] they call us foreign, [it] makes us that much further away from them, so it was really meaningful to just be able to play normal people in that sense.

And I think it was a good step forward to do more shows like this. I know we all three had talked about it before. There was a pressure to do well because we do want to show everybody an example of what could be in the future for more roles and opportunities. So hopefully we set a good example and writers and producers and directors who have seen it will not be afraid to call us.


Sorensen: It was very revolutionary, it has never been done or never been seen in Korea so it was an honor to be a part of it. What I really liked [about the show] just as Carson said, was that this is an international dormitory but the countries didn’t matter. Hans isn't crazy because he's from Sweden. Hans is crazy because he's Hans. 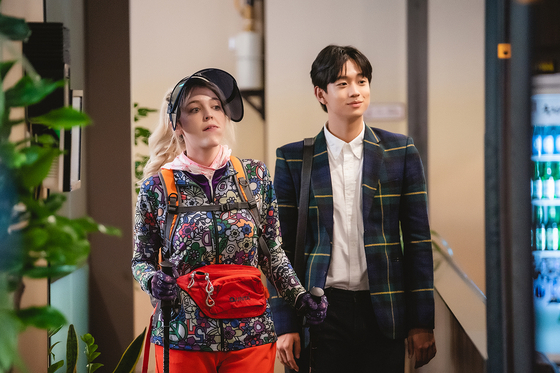 Actor Carson Allen as Carson, a student who loves Korean food and alcohol.[NETFLIX]


Featuring in a series on a streaming platform must have been different for you. How are the responses?

Brown: I think the biggest way I’m feeling it right now is through social media. A lot more followers or a lot more messages of support than I was getting in the past. I got a lot of messages from people saying they loved it. It just feels good that people are responding positively, [although] I’m actually surprised that I haven't got any bad comments. It was just cool to see all this love on my social media.

Allen: I definitely have to say there's two kind of things I noticed with the response that really spoke to me. One was like, while we were filming, we were actually really nervous — this is Netflix, this is going to be a global series — but a lot of the jokes we were like, "how are they going to translate that or how are they going to subtitle that? Is this joke going to make any sense in another language?" So after the show was out and the international response was crazy. We were confused. We were like, "you guys like it? You guys thought it was funny? It made sense to you?" And then it made us realize that they loved it because they were able to relate to us, as [a] foreigner, [or] just [as] university students. There were so many other elements they were able to relate to. They actually loved it so that was pretty crazy. And also the other response I see is that I've been chasing this acting dream for quite a while now, [for] five years, and so whenever I see comments saying "Oh my god, I've been following you, watching your journey since this project," it really makes me feel like they’ve been on the journey with me. It kind of warms my heart. 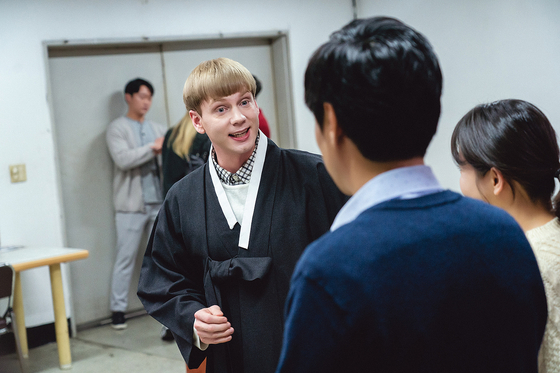 
What do you think of the current position of foreign actors in the Korean entertainment industry? This show sets a good example of breaking the pre-existing stereotypes people have, but what do you think needs to be done for the industry to continue in this direction of portraying diversity?

Brown: If I were to answer honestly, I think there's still a big stigma around it. It's hard to be recognized as a foreign actor in Korea. Unfortunately, no matter how good your Korean is or your acting is, it's still I think, at a stage [where] people view [us]as "the other." But I hope shows like ours and foreigners continue to get more roles. Things can only get better, so I do hope things continue in this direction where one day, it's just like, you're all actors, not you're a foreign actor. I want the mindset to change around that.

Allen: I also think that it's hard to be a good actor. You do have to put in a lot of time and blood, sweat, and tears into becoming better at your skills. And unfortunately as of right now, there are not that many roles or opportunities for foreigners, so a lot of foreigners don’t really pursue it in that way because why would you when there's no guarantee that you're going to make any money off of it, to be able to pay your rent? For many years, people thought I was crazy for just like putting all my attention and everything into this thing that has no guarantee that I would ever even get a role like how I had in “So Not Worth It.” That was very unheard of up until now, so I definitely think with more opportunities, will come more people who take the career more seriously and get more training, and spend more time on being better actors.

Sorensen: When you live in Korea, the whole foreigner thing tends to become your identity like, "Oh it's Joakim, the foreigner, the Swedish guy" and only here I've ever felt that, and I don't want that to become me. I'm not Joakim the Swede. I'm just Joakim. Also, when it comes to acting, it’s like “We need a Swedish person” or “We need a foreigner”. I wanted to go beyond that and maybe someday just hear “We want you because you are right for this part” or “You are good at your craft.” But I think starting with our show it is going to the right direction. And I think we are on the way.