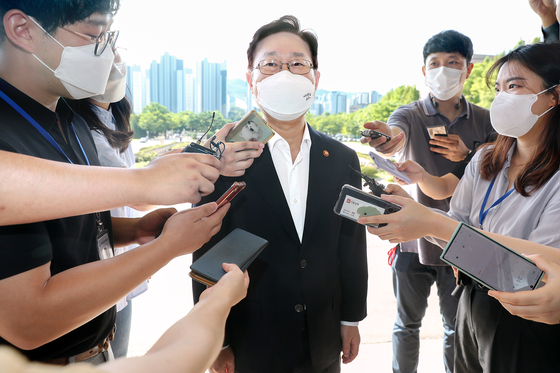 Justice Minister Park Beom-kye talks to reporters as he enters the ministry building on Monday. The ministry held a parole board meeting in the afternoon to decide whether a group of prisoners, including Samsung leader Lee Jae-yong, should be released on parole. [YONHAP]


Samsung's jailed leader Lee Jae-yong will be released on parole this week, the Ministry of Justice said Monday.

"Economic hardship, triggered by the Covid-19 pandemic, was considered in our decision to release him on parole," Justice Minister Park Beom-kye said.

Lee will be released on Friday. But it's still uncertain whether he will be allowed to return to work or not.

A nine-member board chaired by Vice Minister of Justice Kang Sung-kook started an evaluation process at 2 p.m. Monday on whether a group of inmates should be released from prison on parole. In addition to Kang, three other ministry officials were on the board along with five outside members, including Judge Yun Gang-yeol of the Seoul High Court.

The meeting began at 2 p.m. at the Ministry of Justice building in Gwacheon, Gyeonggi, and the outcome was announced around 6:50 p.m.

Detention centers and prisons nationwide conducted preliminary reviews, drafted lists of prisoners eligible for parole and submitted them to the ministry last month. Samsung Electronics Vice Chairman Lee was on a list submitted by the Seoul Detention Center.

Lee is in jail for bribing former President Park Geun-hye. He has less than 13 months left in a sentence of two and a half years.

According to the ministry, the board considers the nature of a crime, motives, the remaining sentence, criminal history, correctional progress and risk of recidivism to make a decision on a prisoner's parole.

All final decisions are made by Justice Minister Park.

Although the law says that a prisoner is eligible for parole after completing one third of a prison term, the ministry has operated on an internal regulation that prisoners should serve more than 80 percent of their terms before parole.

In May, Minister Park approved a major change in that regulation, allowing prisoners who serve about 60 percent of their terms to become eligible. By the end of July, Lee completed 60 percent of his term.

There is a tradition that presidential pardons and paroles are granted on important political anniversaries such as Aug. 15, Liberation Day.

Even after being released on parole, Lee would still be barred from returning to running Samsung. Under the law governing special economic crimes, the Ministry of Justice imposed a five-year employment restriction on Lee in February, after his sentence was finalized in January.

The justice minister, however, has the power to lift those restrictions.

Earlier in the morning, Park said he would announce the decision on Lee's parole as soon as it was made, and would also announce whether he was lifting the restrictions. However, Park did not make that announcement in the evening when he said Lee would be paroled.

While the business community and some politicians, including ruling Democratic Party (DP) Chairman Song Young-gil, said Lee should be released from prison so Korea can maintain its global competitiveness in the semiconductor industry, labor unions and civic groups have protested the idea.

Members of more than 1,000 labor, human rights and civic groups held a series of one-person protests against paroling Lee outside the Justice Ministry building.

The Seoul Central District Court is holding a trial on Lee's possible legal violations in a controversial merger of two affiliates in 2015 that cemented his control over Samsung Group.

A separate trial is also ongoing at the same court over charges that Lee illegally took propofol injections at a plastic surgery clinic in Seoul from 2017 to 2018.

The decision to release Lee on parole sparked a mix of applause and disappointment.

Korea's corporate circles have hopes that Lee can drive forward important investment decisions after being paroled, while others warn that the condition of being under parole – unlike a pardon - will limit the scope of business activities he can engage in.

The consensus, however, is that stalled, big decision like $17 billion in spending on a new chip plant in the United States will likely proceed.


"With Lee returning to the helm of the company, Samsung Electronics will be able to take more decisive steps in making the U.S. investment," said Yang Hae-jeong, head of research at DS Investment & Securities.

The company confirmed during a May leaders summit between Korea and the U.S. that it would inject $17 billion in a new chip factory in the U.S., but it has yet to determine a specific location or timeframe.

"We welcome the parole decision for Samsung Electronics Vice Chairman Lee Jae-yong at a time when the swift pace of decision-making is important," said Woo Tae-hee, Vice Chairman of Korea Chamber of Commerce and Industry.

"Still, it is regrettable that Lee is released on parole – not pardoned," Woo said.